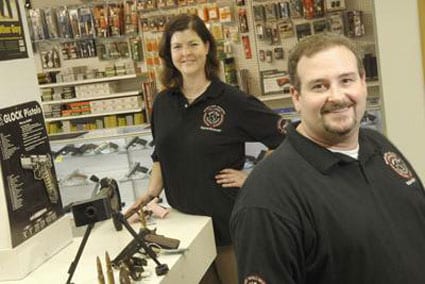 Steve King of Metro Guns said he can see the fear in people’s eyes who have come into his store this week. (Photo: St. Louis Business Journal)

Gun shop owners around St. Louis said they have seen an increase in gun sales this week following the officer-involved shooting death of an unarmed teen which sparked riots and looting in the suburb of Ferguson.

What started out as peaceful protests after 18-year-old Michael Brown was fatally shot, have quickly turned to days of violence and mayhem. Local stores and shops have been vandalized and robbed and a gas station was set on fire Sunday night, in addition to numerous injuries and arrests.

“People are hunkering down because those events are taking place too close to their own home. … In some cases, a half a mile away. Lots of people are afraid,” King told the St. Louis Business Journal.

King said he typically sells about five firearms a day, but sold 30 Tuesday. AR-15s are disappearing off of the shelves, along with home defense shotguns and handguns. However, King also owns another gun shop in Belleville, some 300 miles southwest of Ferguson, and sales have been completely normal.

Al Rothweiler, who owns Mid America Arms in St. Louis, said he’s seen an increase in gun sales this week too. Although the store was closed Sunday and Monday, on Tuesday it was packed full of people. While Rothweiler said he appreciates the extra business, he doesn’t particularly like selling firearms strictly based on fear, but apparently it’s the fear which is driving the sales up.

“The things that have gone on have made people act,” said Rothweiler. “Everyone who bought today mentioned something about Ferguson.”