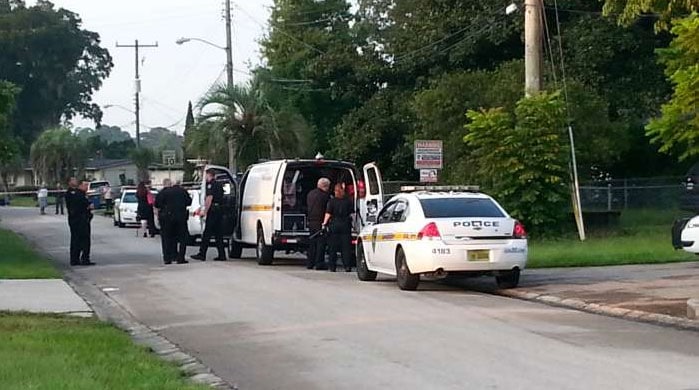 According to statistics from the Florida Department of Law Enforcement, crime across the state, including burglary with forcible entry, was down last year compared with 2012. (Photo: The Florida Times-Union)

A robbery suspect is dead and two homeowners remain in the hospital recovering from injuries following a violent home invasion early Friday morning in the Arlington area of Jacksonville, Florida.

The couple, whose names have not been made public, told authorities they were just waking up around 6:30 a.m. when they heard what sounded like someone breaking in through the back door, The Florida Times-Union reported.

The homeowners were confronted by the suspect and a physical altercation ensued. According to authorities, the suspect assaulted the couple with some sort of blunt object. Reports indicate the object was possibly a baseball bat, but that has not been confirmed by authorities.

However, at some point during the altercation, the man was able to get away from the suspect and retrieve a firearm. He fired at the suspect, striking him an unknown number of times.

When officers arrived, the suspect was found dead inside the home.

The couple was transported to a local hospital to be treated for their injuries, which, according to Sgt. Michael Paul of the Jacksonville Sheriff’s Office, confirmed were consistent with blunt force trauma.

The man’s injuries were reported to be worse than the woman’s. Both are currently listed in stable condition and their injuries are not believed to be life-threatening.

There are reports that, in addition to the couple, there was also a child present in the home, presumably the couple’s grandchild, but the child was not injured during the home invasion. It’s unknown how much of the assault, if any, the child may have witnessed.

The name of the deceased suspect has not been released at this time.

Authorities remained on the scene this morning, with the area marked off with police tape, as the investigation continues.

No other details are available at this time.