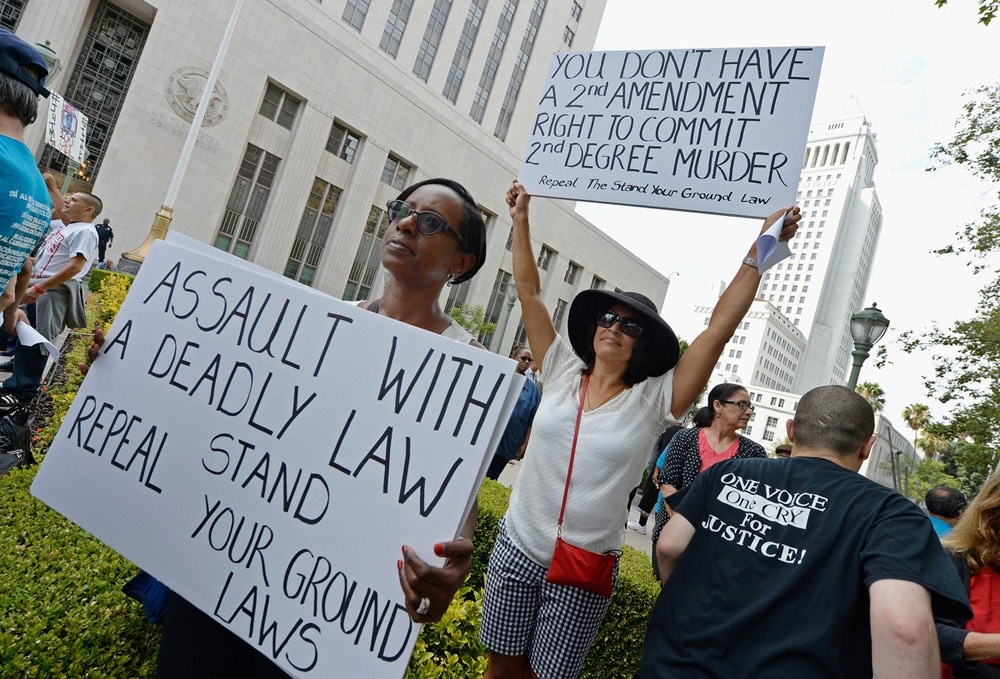 Some protestors of Zimmerman’s acquittal blame Stand Your Ground laws for Zimmerman’s actions, despite his defense not invoking the argument. (Photo: Kevork Djansezian/Getty Images)

A national group of attorneys recommended last week that states with stand-your-ground laws either repeal or at least refuse to enact them in a published report that found increases in homicide rates associated with the laws.

“We’ve heard nothing good about stand-your-ground laws,” said Jack Middleton, task force co-chair, in a statement. “In fact, the more you look at them, the more problems you find. It’s our hope that the ABA as a whole will take a position against these laws.”

The report also found a majority of law enforcement personnel were confused about what actions were justified under the stand-your-ground laws in their states and recommended the ABA develop a national education campaign to combat misinformation surrounding the laws.

Some 33 states have stand-your-ground laws in effect, which in many cases give victims the ability to stay and defend themselves when facing the threat of bodily harm without legal repercussions.

The National Rifle Association rejects the report, saying it fails to distinguish between situations in which stand-your-ground laws were or were not invoked by people defending themselves.

“Most states now have Stand Your Ground laws, and in 2012 the nation’s murder rate fell to a 48-year low,” said Catherine Mortensen, National Rifle Association spokeswoman, in an email to Guns.com.

According to the Death Penalty Information Center database, the country’s overall murder rate has fallen and several states with duty-to-flee statutes — including Arkansas, Delaware and Maryland — have murder rates higher than the national average. Those states also saw their murder rates increase from 2010 to 2012, according to the Washington-based non-profit.

Lawmakers in Alabama, Florida, Louisiana and Georgia were among those in some 10 states that have attempted to “rein in” stand-your-ground laws with no success, The Washington Post reported.

The ABA task force briefly touched on last year’s highly contentious and widely publicized case involving George Zimmerman, a man in Florida who shot and killed an unarmed black teen, Trayvon Martin, and was acquitted of all charges. Zimmerman’s defense, however, did not invoke stand-your-ground in its argument.

The report found that cases where white shooters killed black victims were 350 percent more likely to be ruled in favor of the white person than cases where both the shooter and the person killed were white.

“Implicit racial bias is something everyone has,” said task force member David Harris. “The criminal justice system does not account for implicit bias because it’s a newer concept than what we’ve been dealing with in the past. If we’re going to have stand-your-ground laws, then training would make a big difference.”