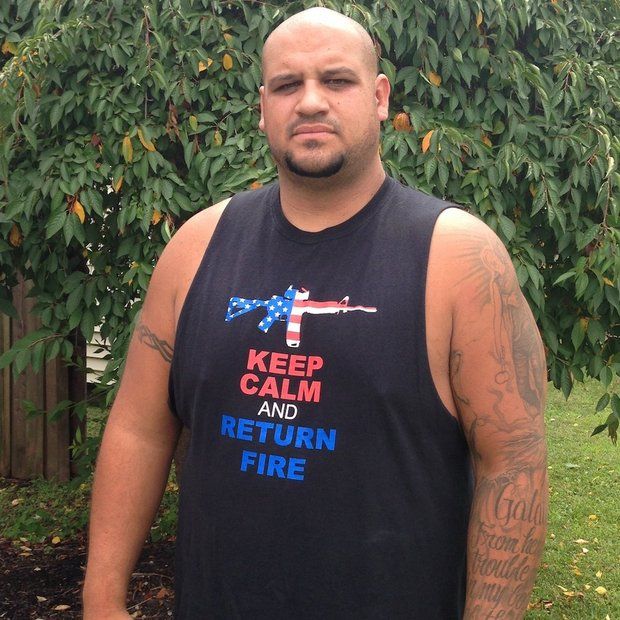 Mario Alejandro said his kids bought him the shirt as a Father’s Day gift.

A Marine veteran who served in Iraq was told he couldn’t go into Six Flags Great Adventure Saturday because his “Keep Calm And Return Fire” shirt was “offensive.”

Mario Alejandro was celebrating a birthday party at the amusement park with his family when a security guard stopped him and said he had to either change shirts or leave, NJ.com reports.

“I was walking in through the gate with my wife and kids, who were in front of me, when a security guard grabbed me and said, ‘I can’t let you into the park with that shirt on. That shirt’s offensive,” Alejandro told the newspaper. “I said that it’s not offensive, it’s a military shirt. I told him that I am an Iraq veteran … I served in the war. But he said, ‘I don’t care, you have to take that off … or you need to buy another shirt to put over it.’”

While Alejandro first refused to comply, he eventually changed shirts, but not before standing at the entrance and telling hundreds of patrons what was happening.

Alejandro and his family were upset over the incident, and Alejandro said no veteran should be treated that way.

“At the very least [Six Flags] should revise their policy,” Alejandro said. “I fought for this county. I laid in a hole for 36 hours with no sleep, and had friends die for this county and so the people here could have the freedom to do things like visit amusement parks. So when they told me I couldn’t come in there with my family because of my shirt – a patriotic shirt – it hurt a lot. No other veteran should ever have to experience that.”

Six Flags spokeswoman Kristin B. Siebeneicher said clothing with “offensive” language isn’t permitted in the park, but added the incident is “under review.”

“Our goal is to maintain a fun, safe and family-friendly environment,” Siebeneicher said. “Our dress code does not permit clothing with vulgar, offensive or violent language or images. If a guest is wearing such attire, we askt hem to remove and replace it with another item of clothing; and if they do not have one, they are able to purchase a replacement item at a gift shop.”