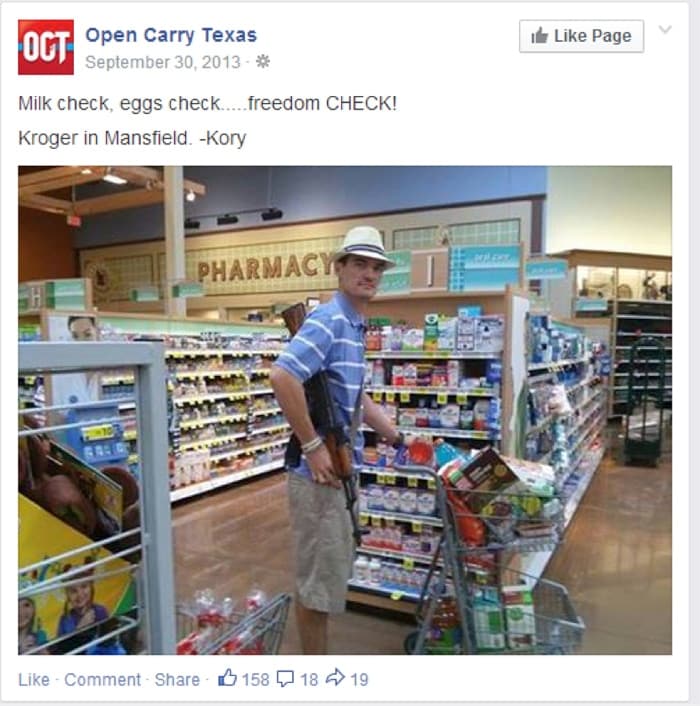 Moms Demand Action has taken screenshots and grabbed images from Open Carry Texas’s Facebook page before they were taken down.

Moms Demand Action for Gun Sense in America has set its sights on grocery giant Kroger, petitioning the national chain to prohibit the open carry of guns in its stores.

In a statement released Aug. 18, the gun control group backed by former New York mayor Michael Bloomberg referenced recent gun-related incidences and open carry demonstrations at Kroger-owned stores as reasons for the president and CEO Michael Ellis to “make a clear statement that the open carry of firearms is not welcome in its stores.”

“The history of shootings at Kroger stores underscores the risk of allowing open carry demonstrations and rallies to continue,” said Shannon Watts, founder of MDA. “It’s impossible for any employee to ascertain the intentions of an individual carrying an assault rifle — and given the potentially deadly outcome of mistaking a criminal for a protester, or vice versa, it is imperative that the largest supermarket retailer in the nation stands up for public safety.”

“Given how lax the majority of states’ open carry laws are, there is no way for store employees or Kroger’s loyal customers to know whether these gun extremists are good guys or bad guys,” Watts added.

Kroger, which owns 17 brands that are responsible for $98.4 billion in sales in fiscal 2013, released a response Aug. 15 on its website, stating:

“The safety of our customers and associates is one of our most important company values. Millions of customers are present in our busy grocery stores every day and we don’t want to put our associates in a position of having to confront a customer who is legally carrying a gun. That is why our long-standing policy on this issue is to follow state and local laws and to ask customers to be respectful of others while shopping. We know that our customers are passionate on both sides of this issue and we trust them to be responsible in our stores.”

Moms said there has been at least 16 threats at stores around the country, and cited three specific incidences all from this year. The first in Marietta, Georgia, where woman shot and killed her husband before killing herself. Another in Lawrenceville, Georgia, where a man opened fire, shooting two people. And the last, a woman in Nashville, Tennessee, threatened to shoot and kill an employee.

Additionally, open carry groups, like Open Carry Texas, have a history of promoting photographs and videos on social media of its members carrying rifles and shotguns in national retailers and restaurants — something Moms has used to its advantage.

Since renowned brands like Chipotle, Sonic, Chili’s, Jack in the Box, Target and Starbucks have responded to Moms, OCT has seemingly given up on unannounced demonstrations and has since scrubbed the imagery from its social media pages.

In response, OCT shared the story via Facebook, with the introduction: “They’re at it again, but for other reason than ‘they don’t have an anti-gun policy.’ #‎guncontrolextremists are pathetic. Bloomberg is licking his wounds on recent defeats in elections and legislatures and is returning to business bullying.”

Guns.com contacted OCT for comment, but did not receive a response in time for publication.