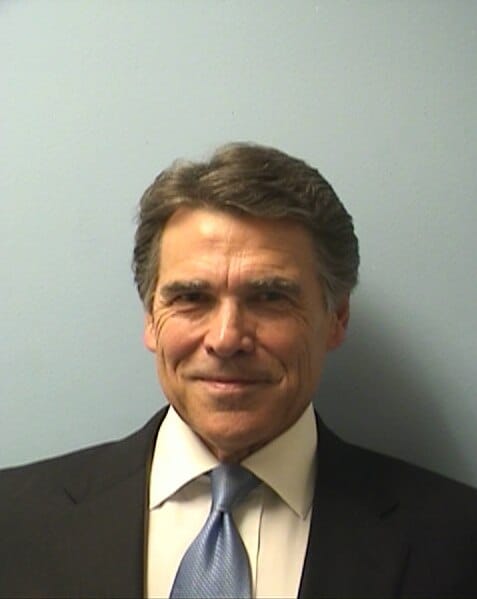 “You’d think any governor, Democrat or Republican, would expect this important unit with jurisdiction over state officials, be led by someone who lives up to the high standard of conduct and personal integrity. And this issue is far bigger than me. It is about the rule of law. It’s about the constitution that allows, not just a governor, but every citizen to speak their mind free of political interference or legal intimidation.

“This indictment is nothing short of an attack on the constitutional powers of the office of governor. There are important fundamental issues at stake and I will not allow this attack on our system of government to stand. I’m going to fight this injustice with every fiber of my being. And we will prevail. And we’ll prevail because we’re standing for the rule of law.”

Prosecutors say the allegations stem from 2013, when Perry threatened to defund Travis County District Attorney Rosemary Lehmberg if she didn’t quit following her guilty plea to drunken driving  in April 2013. When she refused to step down, Perry followed through, vetoing funding for her office to the tune of $7.5 million. Lehmberg leads the Texas Public Integrity Unit, which is intended to fight official corruption and was reportedly in the process of investigating one of Perry’s pet projects.

To fight the charges and play Texas politics, Perry has gathered high-profile attorneys from the Lone Star State and Washington.

The New York Times reports that the roster includes Ben Ginsberg who acted as counsel to the Bush-Cheney campaign, represented George W. Bush in the 2000 Florida vote recount and was co-chairman of President Obama’s committee on election administration. Bobby Burchfield, who has vast experience in corporate litigation and twice argued before the Supreme Court. From Texas, Perry recruited Thomas R. Phillips who served as the chief justice on the Texas Supreme Court from 1988 to 2004, and Tony Buzbee, a Houston legal powerhouse

While Perry will not be running for reelection for governor, many think he’s on track for a second presidential run.