The world this morning is so calm and nuanced, in stark contrast to the chaotic events of Aug. 14.  That night, the deep green pine trees pierced the blazing orange sky like the endless rows of phalanx polearms of antiquity, heralding in the jet-black night. Nature’s nocturnal violence was overshadowed by wicked-looking electricity in green, red and blue, dancing among a symphony of gunfire at the 2014 Crimson Trace Midnight Invitational three-gun match.

This audio-visual tour de force isn’t simply an expensive alternative to fireworks, it’s meant to teach both the advantages and limitations of low-light shooting.

Two days prior to the event, a few lucky writers were given access to the course and training prior to running it. Since very few places allow night shooting, we all needed some help. Thankfully, Crimson Trace recruited some of the best shots in the industry to show us the ropes.

My group started with basic shotgun manipulation drills instructed by the talented, knowledgeable Lena Miculek. Our drills mainly focused on reloading our shotguns two shells at a time, since keeping a shotgun fed is the most difficult aspect of using one. With the exception of removable magazine-fed shotguns, reloading a scattergun is unlike anything else a shooter is accustomed to. There certainly was a steep learning curve for me, as I’ve only ran a shotgun in a handful of competitions, and the majority of which only required a few reloads. 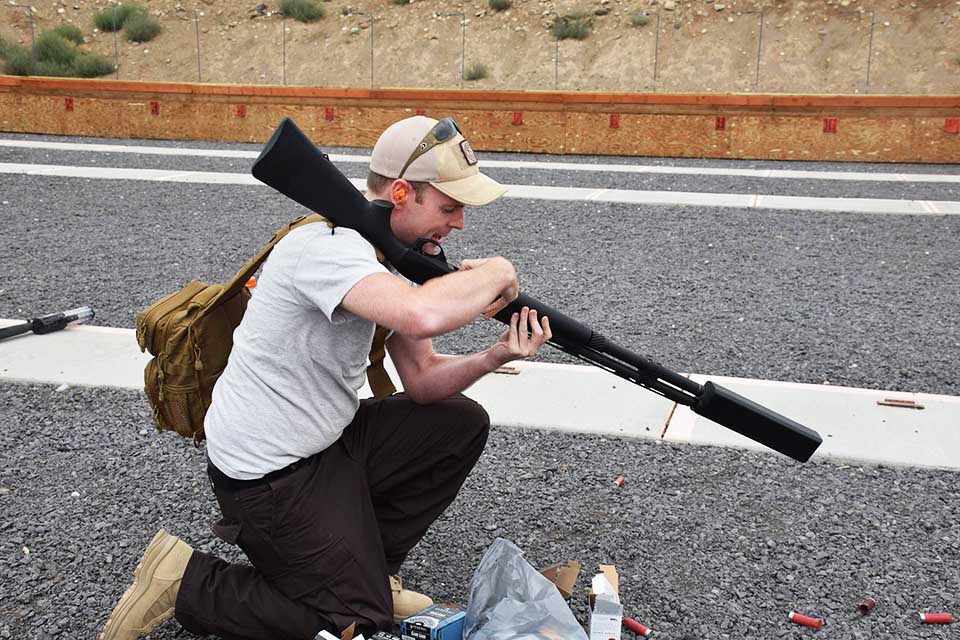 The author attempting a reload, two shells at a time. (Photo: Matt Korovesis)

After getting much more comfortable reloading and manipulating a shotgun, my group and I headed over to the rifle range where we met with Jerry Miculek, world-famous revolver man and three-gun champion shooter. Known for his speed with a six-gun, Jerry is no slouch with a carbine. He helped all the media members hone their skills in anticipation for the upcoming night shoot, egging us on with  commands of, “faster!”

After a nice warm up of a few magazine, Jerry paired us up with other shooters against a plate rack some 60 yards away. These targets are fairly easy to hit at a leisurely pace, but when racing against another shooter seem to dodge all but the most accurate shots taken at them. I had the pleasure of being paired with Chris Cheng, Top Shot season four winner, and he thoroughly kicked my ass all but one time, and that single victory was hard-won. 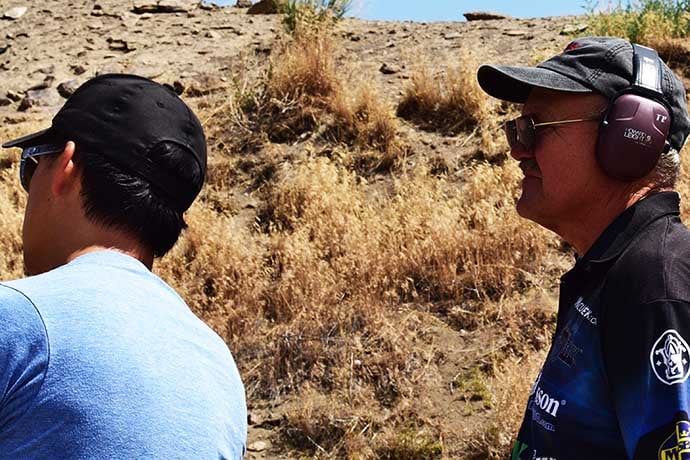 Hosted for the fourth year in Bend, Oregon, the match truly overwhelms the senses. Handling firearms is difficult enough in broad daylight under the stressful conditions of competition. When the element of total darkness is added, the experience is truly humbling. Perhaps you’re like me, a good shot and fairly confident in your abilities, you too will feel very green in this environment.

Crimson Trace reps began organizing this event to showcase the benefits of the company’s products in low, or no-light situations. In a previous article, I wrote on how I was not a huge light or laser guy until I had some more serious, first-hand experience with them. This event reinforced that ten-fold, but brought to my attention a less-serious, but still important aspect of shooting with lights and lasers on a firearm — it’s awesome. 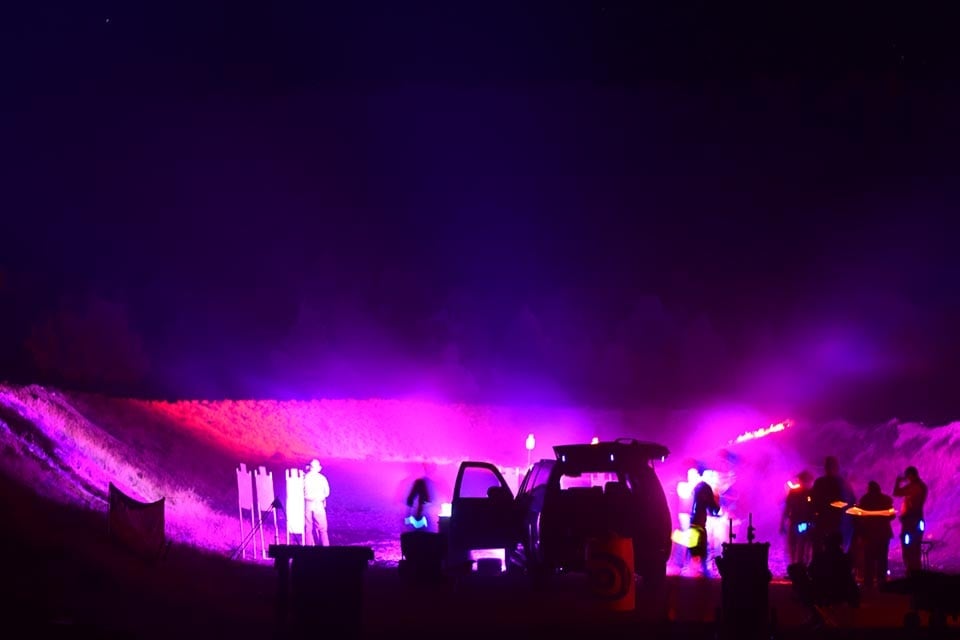 This photo gives me a headache just thinking about it. (Photo: Jim Grant)

I mean that in the truest definition of the word, not in the way that many use it today to mean very cool, but in its original meaning — to inspire awe. I was awestruck by the dazzling array of lights, lasers glow sticks and muzzle flashes during the night match. If attention deficit disorder were a video game, the Crimson Trace Midnight Three-gun event would be the final boss. It was audio-visual overload for me, an experienced shooter prepared for the event and wearing ear-plugs. Imagine what it would be like to be instantly teleported into the middle of a stage while someone like Chris Cheng is running it.

That’s when the oft understated advantage of a light laser setup hit me like a blind-sided semi; being on the receiving end of a dazzling light show preceding a lethal volley of jacketed hollow point bullets erupting from the darkness, is the very definition of shock and awe. 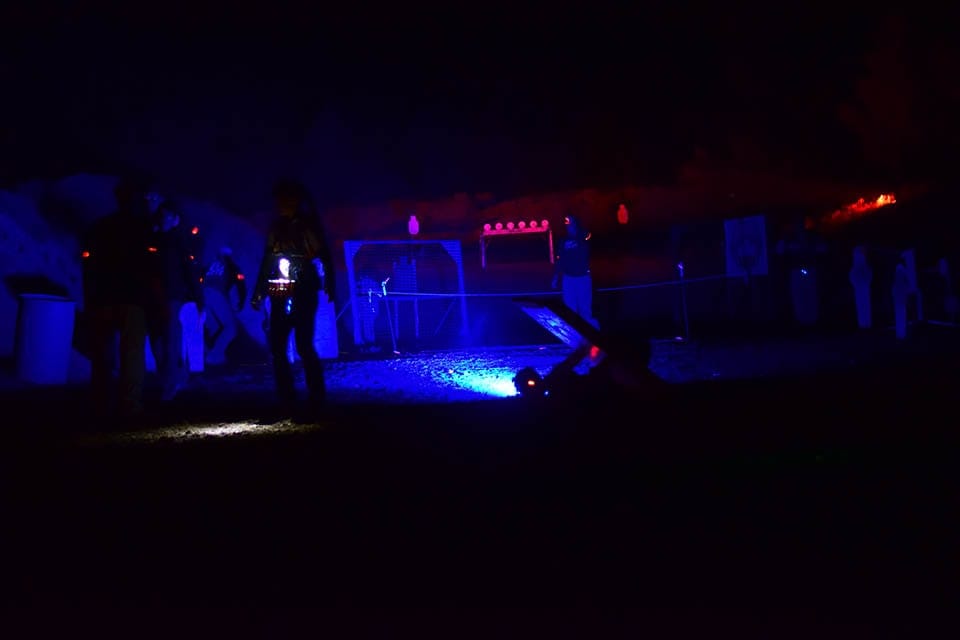 Pop quiz: which of this individuals is your attacker? If you said, “It’s impossible to determine without a light” you win ten internet points. (Photo: Jim Grant)

Another aspect I hadn’t considered prior to the match was the ability of aiming a weapon that you couldn’t otherwise without the use a laser. On one of the later stages, competitors had to engage targets from around cover, off-hand with both their strong hand and weak hand. These shots would have been incredibly difficult without the aid of a laser. Some of the competitors mentioned that this was something they would never have to do in a real shoot-out because blind-firing is dangerous and unpredictable.

They’re partially correct, yes blind-firing around a corner is dangerous and, frankly, negligent. However, the course didn’t force shooters to blind-fire. Rather, it made them lean out just enough to see their laser and fire on the appropriate targets. In a real shoot-out most people aren’t Rambo, they don’t feel invulnerable and if shot, don’t simply walk it off. So if they can, they normally run and take cover.

Having the ability to fight back might mean being able to shoot at a target whose rampaging through a shopping mall or school from behind. But what about those horrifying confrontations where the attacker is shooting at you and you need to return accurate fire? Having a laser means you don’t have to place your face behind your gun to hit a target. It adds the tactical flexibility to aim around a corner at whatever height appropriate while peaking out at a different one. This way if your attacker is simply shooting at movement or shapes, they’ll be trying to shoot at the muzzle of your weapon, while you peek out to line up the laser sight on them. Sure, this isn’t the most common self-defense scenario, but having additional flexibility when dealing with an attacker, helps even the playing field. 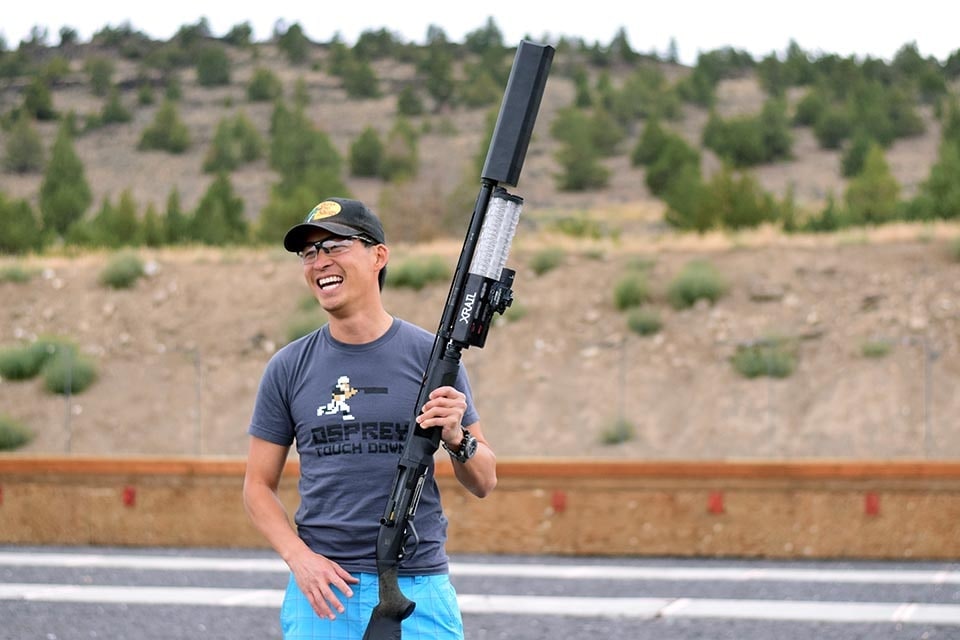 Which brings me to another important consideration when preparing for a nocturnal engagement, arms and ammo. As the above photo demonstrates, professional shooters like their ammo plentiful and their weapons fast and quiet. Some might argue that Chris’s choice of a Salient Arms Benelli M2 with XRail is only appropriate for competition, but the reason he selected this setup mirrors the realities of defensive combat: he doesn’t know how many targets he’ll have to engage, and under the less-than-ideal conditions of low-light combat, how many shots it will take him to neutralize them all. Logically, it makes total sense then to keep as  much firepower as possible by your bedside. Just as Chris doesn’t know how many shots it will take him to neutralize all his available targets, neither do you. Attackers high on stimulants or bath salts might not immediately stop after a center mass hit from a shotgun, even if they are mortally wounded.

Lights and lasers have obvious tactical advantages when mounted on a weapon intended to low-light combat, but often times many of their less-obvious benefits are glossed over by shooters not familiar with their use in such environments. While neither a light nor a laser is a substitute for diligent training, they can give you the edge you need to survive an attack, and shouldn’t be overlooked.