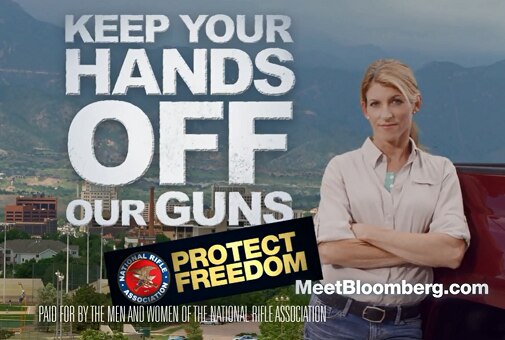 The National Rifle Association released a television ad Tuesday which attacks political rival, former Mayor Michael Bloomberg, over his perceived “hypocrisy, arrogance, and desire to tell the American people how to live their lives.”

The 30-second ad, titled Insult, is the first of a promised series of spots that will be released by the gun rights group with Bloomberg himself as the subject. Bloomberg, the public face of gun control group Mayors Against Illegal Guns and the follow-on Everytown for Gun Safety, has long been considered the ideological opposite to the NRA’s platform.

“Michael Bloomberg has declared war on the NRA and our five million members,” said Chris W. Cox, executive director of the NRA’s Institute for Legislative Action in a release. “We will not sit back and let him use his billions of dollars to impose his radical anti-freedom agenda on the American people. Our effort will expose Bloomberg as an arrogant hypocrite who thinks he knows best how people should live their lives.”

Insult, which features a female gun owner whose truck has a Magpul bumper sticker, directs viewers to MeetBloomberg.com, which details more information about the billionaire gun control advocate as explained by the NRA.

The new ads, timed to influence the upcoming mid-term election cycle, will initially play on cable television nationwide and on broadcast stations in Colorado. Gun accessory maker Magpul famously announced plans to leave that state following the institution of a new set of gun laws. Those laws led to an unprecedented recall election to remove the lawmakers behind the law, backed on each side by Bloomberg and the NRA.

The ad is the latest in the title card fight between Bloomberg and the NRA that has been years in the making. Even before forming his Everytown group, backed by $50 million of his own money to become the self-appointed nemesis of the NRA, Bloomberg declared war on the gun rights group and had pledged $12 million to his Mayors’ Against Illegal Guns organization.

This has led to a series of statements and rhetoric back and forth from both sides. Everytown even went so far as to stage a protest of the NRA’s national convention in May.

The NRA plans to expand the ad series to additional states in the coming weeks.