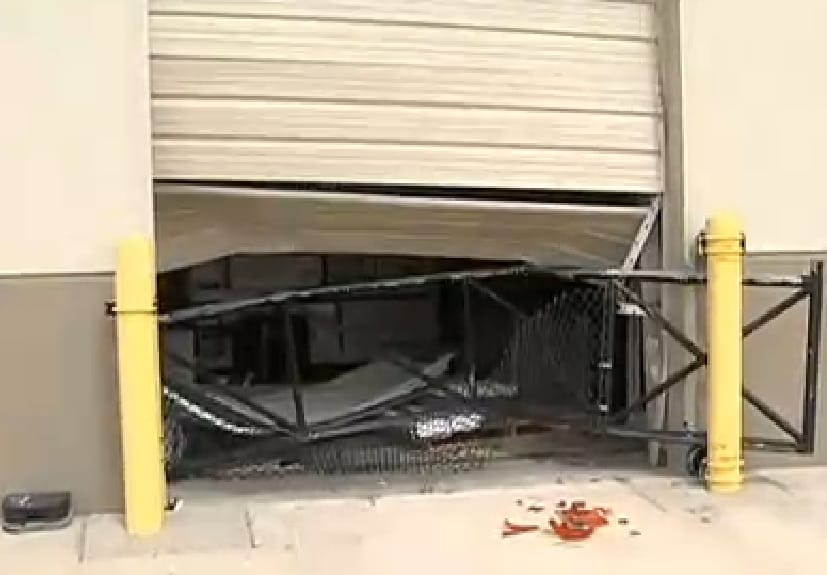 Burglars crashed through the roll-up doors at a Houston Gander Mountain to grab 10 AR-15s Monday. (Photo: My Fox Houston)

After striking out at an area gun store, crooks pulled off a smash-and-grab style burglary at a nearby big box sporting goods store, stealing a number of AR-15s after crashing through a back door.

According to reports from My Fox Houston, the early morning burglars first backed a truck through the front of Cypress Armory only to have their plans foiled by the fact that the store secures its firearms at night. An hour later at a Gander Mountain location nearby, a group of thieves were more successful in their caper. After breaching a roll-up door, they made away with ten AR-15-style rifles.

While Gander Mountain has not released any information, it is reported that Harris County deputies retrieved video surveillance data from Cypress.

Cypress themselves are further confirming through social media that, while no firearms were taken, some optics and other items were.

“Plus the truck coming thru the front of the store created considerable damage,” Cypress said via Facebook. “Fortunately we were able to get a crew out to clean up and begin repairs earlier in the day and will be open tomorrow, normal business hours. Until repairs are completed we have hired off duty law enforcement to be onsite to provide security and make sure things are secure.”

The theft is similar to other smash-and-grab incidents at gun stores in recent months. In January, the AR Bunker in rural Newnan, Georgia, had 30 rifles stolen in 50 seconds flat after thieves crashed a Honda Accord through the storefront and quickly left. This came a week after a Mississippi burglar attempted to hit three gun shops back to back, using his truck as a battering ram.

The Bureau of Alcohol, Tobacco, Firearms and Explosives routinely offers rewards for information leading to the conviction of those involved in burglaries, larcenies and robberies that target Federal Firearms License holders such as the $5,000 put up for a recent theft in Minnesota. Industry groups such as the National Sports Shooting Foundation often match these rewards.

Larry G. Keane, NSSF senior vice president and general counsel, spoke to Guns.com recently about how the NSSF helps with these cases.

If you have any information that could be useful to investigators about the Cypress Armory or Gander Mountain burglaries, contact the Harris County Sheriff’s Office at 713-221-6000.