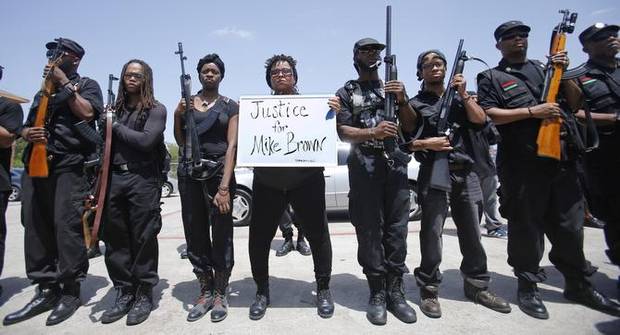 The newly formed group, calling themselves the Huey P. Newton Gun Club after one of the founders of the 1960s Black Panther party, open-carried rifles and shotguns on their evening walk along Malcom X and Martin Luther King boulevards. The peaceful activists, clad in black, according to the Dallas Morning News, chanted “Black Power” and “Justice for Michael Brown” along their route.

“We think that all black people have the right to self-defense and self-determination,” said Huey Freeman, a march organizer. “We believe that we can police ourselves and bring security to our own communities.”

After announcing plans for the rally earlier this week the group began its march around 8 p.m. at a carwash on Malcom X Boulevard and wound through the neighborhood for about 90 minutes. Walking and talking to local residents throughout its rally, the group stopped at a restaurant and ate alongside a Dallas Police Department deputy chief and shift lieutenant who were already patronizing the establishment.

Noted Second Amendment scholar Adam Winkler in the past described namesake Newton, and the Black Panthers, who routinely conducted armed patrols to “police the police” as “the true pioneers of the modern pro-gun movement.” The group seems to intend to walk in the footsteps of those vintage firebrands.

In a public release to the media, the new group advised that they will “conduct the first of an ongoing and necessary armed self-defense patrols through our communities in the coming week.

The group also has a list of demands posted on its webpage.

1. We demand the immediate end to police brutality, harassment, and murder of the people.

2. We assert the right of the people, particularly those of color, to bear arms and protect themselves where local, state, and the federal government have historically failed to do so.

3. We demand that the media, in coordination with police, cease immediately assassinating the character of victims subject to police terrorism.

Kory Watkins, leader of Open Carry Tarrant, perhaps one of the most well-known Dallas area open carry groups, likes what he saw in the actions of the Huey P. Newton Gun Club.

“I was not there today but I am in full support of this group,” Watkins posted on Facebook. “This is a very strong statement that they will not tolerate what happen (sic) in, Ferguson. This is good!”

Another well-known group in the region, Open Carry Texas, also supports the newest addition to the quest for Second Amendment advocacy in the state. However, OCT voiced confusion over, “The creation of a whole new open carry organization based on skin color.”

OCT itself, which said it accepts members regardless of ethnicity, recently caught flak when it planned a march in Houston’s Fifth Ward, a predominantly black area of the city. When leaders from the area and the group met, things quickly got heated and OCT elected to postpone its event.

Guns.com reached out to the Huey P. Newton Gun Club for comment, but has yet to receive a response.