When former U.S. Navy bomb specialist Taylor Morris, who lost both his legs and arms when he stepped on an IED while in Afghanistan in 2012,  twisted one of his prosthetic legs out of place inside McCarran International Airport, American Airlines lead mechanic Keith Duffner was quick to lend his expertise. Using a special tool designed for aircraft, Duffner was able to get the amputee back on his feet. 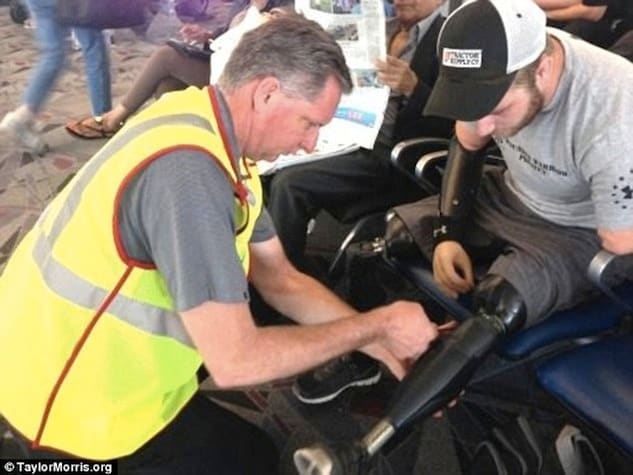 “I fell coming out of the x-ray machine and twisted something on my leg that wasn’t supposed to twist … once I got up, my toe was pointing about 90 degrees outward, so my left foot and my left toe was pointing completely sideways. I could stand on it, but it was hard to walk on it.”

Morris managed to make it over to an AA employee and ask if they had a specific type of allen wrench. The workers relayed the message to the mechanics and in no time at all, Duffner met Morris at the gate and got to work. Moments later, the prosthetic limb was fixed.

“It was great to have him come with the right tool that I needed… It was probably his first prosthetic adjustment, but he did a dang good job,” Morris said.