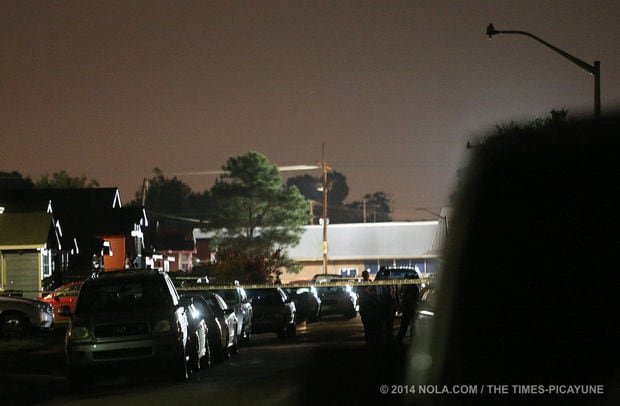 One neighbor told reporters that one of the girls could be seen leaving the house and crying after officers arrived. (Photo: The Times-Picayune)

A robbery suspect was fatally shot after attempting to rob a New Orleans couple in their own yard late Wednesday night, before forcing them inside their home where the husband was able to retrieve his handgun and protect his family.

Local media reported the couple, whose names have not been made public, were sitting outside on a patio behind their home about 10 o’clock when they were approached by the suspect who was wearing a mask and armed with a gun.

The suspect demanded money from the couple before forcing them inside their home where three young girls – ages 6, 13 and 14 – were asleep inside.

But before the suspect could harm his family, the 28-year-old husband opened fire on the suspect, who was pronounced dead when authorities arrived later. The suspect’s gun was recovered from the scene.

The suspect has only been identified as a 25-year-old male.

While authorities said there’s no known connection between the homeowner and the suspect, nearby neighbors said crime has been on the rise in the area.

“It’s just the days we live in,” said Stanley Vincent, who lives behind the home where the attempted robbery occurred. “I don’t understand it.”

Vincent, as well as Larry Levy, who lives a few doors down, told reporters they believed the man was justified in shooting the suspect.

“I guess he did exactly what I would have did,” Levy said. “He was trying to protect his family.”

The broken street lights, which have been busted out since Hurricane Katrina nine years ago, leave the street pitch black at night, giving way to criminal activity under the cover of darkness.

One woman who lives in the area, but did not wish to be identified, told reporters, “This is really not a bad community. It’s the outsiders who come in because we don’t have lights.”

Levy added, “I hope it doesn’t get to a point to where everybody has to arm themselves, but it might come to that.”

Levy and Vincent, who are both retired from the military, are working to rebuild the neighborhood watch program.