University newspaper changes name because current one deemed too violent 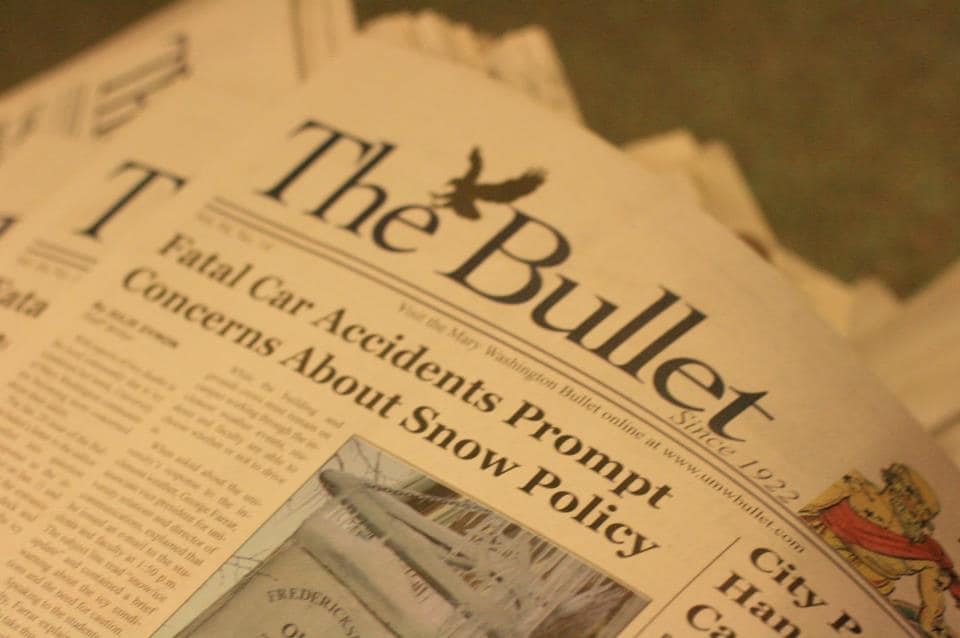 The long-serving UMW student newspaper, the Bullet, is facing a renaming because its current one “propagated violence and did not honor our school’s history in a sensitive manner.” (Photo: Facebook)

The Bullet, the student-published news organ of the University of Mary Washington since 1922, is changing its name in an effort to be more sensitive to violence.

After 96 years, the internal board of the publication recently announced that the 10-page paper would soon be re-branded The Blue and Gray Press as a more benign tribute to the student colors and campus history.

“The editorial board felt that the paper’s name, which alludes to ammunition for an artillery weapon, propagated violence and did not honor our school’s history in a sensitive manner,” said a release from the paper’s staff to the Fredericksburg Freelance Star. “The board intends to remain faithful to the history our university stands upon, and we continue to honor this history both in a respectful and meaningful way.”

Originally started as a newsletter for the Virginia-based public liberal arts and sciences university with an enrollment of about 5,000, the student publication evolved into a 10-page weekly paper. The Bullet has been recognized with awards from the Society of Professional Journalists, the Associated Collegiate Press and the Newspaper Association of America Foundation.

This summer’s move was not the first time the paper faced a re-branding. An earlier effort during the Vietnam conflict to rename the publication was considered but not implemented.

UMW sits along Marye’s Heights, a strategic key during the 1862 Battle of Fredericksburg in the Civil War. When the school was founded in 1908, it drew its colors from this historic clash, with blue representing the Union Army while gray that of the Confederates. Several buildings including the president’s residence date back to the conflict.

Ironically, the editor of the Blue and Gray Press told Campus Reform that the new name was to reflect the student body in a meaningful way but distance the ties to the 19th century war between the states fought literally on the school’s grounds.

“In this day and age, no one really cares about the Civil War. We wanted something that was updated,” said Alison Thoet, the paper’s editor-in-chief.

According to the National Park Service, which maintains the neighboring Fredericksburg and Spotsylvania County Battlefields Memorial National Military Park, more than 500,000 people visit the battlefield each year.

Although just announced this week, the renaming is drawing flak from alumni on the publication’s Facebook page while an informal poll on the  Fredericksburg Freelance Star‘s website has public opinion by large margin weighing in that the name should have remained the same.

However, the ink is not dry on the paper’s new masthead just yet. The change still has to be approved by the UMW Student Activities and Engagement Office before taking effect.

Should the SAE grant permission for the planned change, the first edition of the new, bullet-less, Blue and Gray Press would be published on Sept. 4.