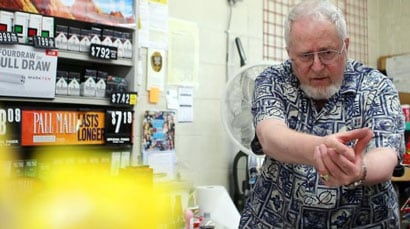 “I didn’t get up in the morning to take somebody’s life,” said the store owner. “I’m glad I didn’t have to, but it came that close.” (Photo: Fox)

An attempted robbery of a family grocery store in Bremerton, Washington, Wednesday night didn’t quite turn out as planned when the store owner, armed with a gun, tripped up the would-be robber, sending him on his way.

“I could see this coming,” store owner Jim Fee told the Kitsap Sun.

It was about 9:15 when the suspect, whose face was covered with a bandanna, walked into Rob’s Quick Stop Grocery, apparently not noticing the stickers posted outside supporting the local police department and the National Rifle Association. He made his way towards the counter where Jim’s wife, Kim, was standing.

“My wife said something to the effect of ‘oh, no,’ and she dropped to the floor and yelled for me,” Jim told a local Fox affiliate.

The couple assumed he was after money, though he never got the chance to ask for any. They also believed the suspect spotted Kim and not Jim, who sprang into action immediately, grabbing his .380 and training it on the suspect’s forehead. At that point, the suspect switched his gun back and forth from Kim to Jim before leaving the store empty handed.

The suspect was described as a short male with dark skin, possibly Hispanic, wearing baggy clothes. Although his face was covered, Jim said the man had dark eyes. Authorities believe he may have taken off in a green Toyota with a blonde female.

According to Jim, the suspect didn’t appear to know what he was doing.

“He handled the gun like he didn’t know how to handle a gun,” he said.

This was the second robbery the couple has experienced in the 10 years they’ve set up shop.

“It used to be they would simply take your money, and now they’ll take your money and kill you,” said Jim, adding that though it’s a “rough neighborhood,” they’re not going to let anyone drive them off.

“All we want to do is mind our business, run a store and not be hassled,” he said.

“He was able to avert a tragedy,” said Thomas Ness, who lives nearby. “Who knows what would have happened if he didn’t have a gun?”