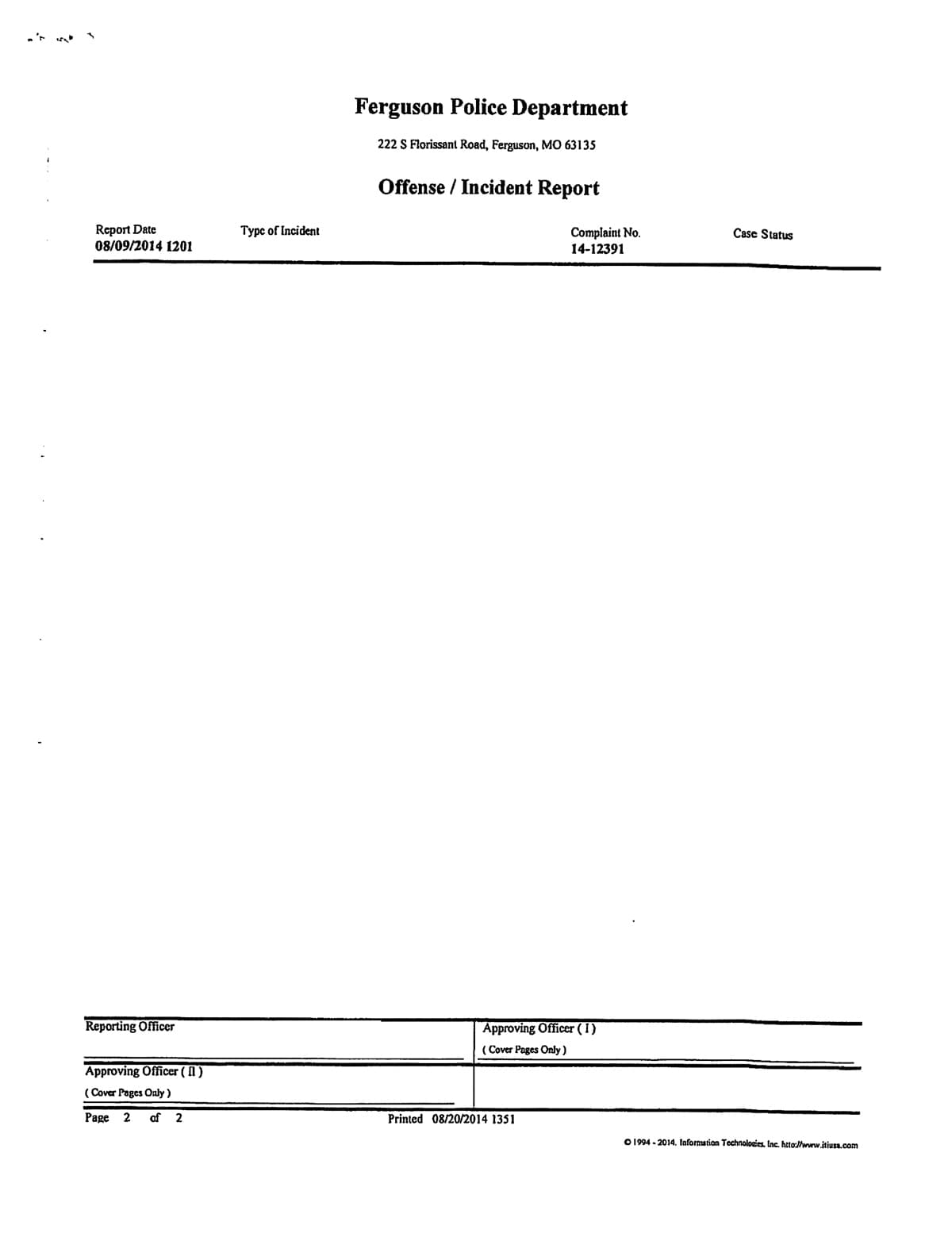 The redacted incident report says nothing about the incident. (Photo: ACLU)

It’s been nearly two weeks since the shooting death of 18-year-old Michael Brown and little is known about the altercation that led to his death.

In response to a request by the American Civil Liberties Union, the Ferguson Police Department released the incident report on Aug. 21 but redacted almost everything in it, including names and details of the incident itself.

“It is deeply troubling and unacceptable that the two incident reports we’ve received completely lack any detailed information of what happened when Officer Darren Wilson encountered and then shot an unarmed Michael Brown,” the ACLU said in a news release. “Two weeks after the shooting, this demonstrates a continued lack of transparency and adds to confusion about the events of the day. We still do not have what should be publicly available information about the police shooting of Michael Brown.”

The report, however, does detail dispatch times, stating that police arrived on the scene at 12:02 p.m. on Aug. 9 and the final unit cleared as of 7:07 p.m.

The St. Louis County Police Department also released a redacted incident report to the ACLU on Aug 20, but besides identifying the victim as Michael Brown, has redacted all details of the incident.

There are still conflicting reports about what actually happened in the fateful moment. The Ferguson Police Department has stood by its claim that Brown attempted to disarm Officer Darren Wilson, and in response Wilson shot Brown six times. However, witnesses say Brown surrendered and was then gunned down.

Additionally some news outlets are reporting that Wilson suffered a “facial injury” such as a “blown eye socket” during the scuffle, but authorities have yet to confirm that detail.

A grand jury was set to start hearing evidence Aug. 20 about the shooting and will determine whether or not authorities should file charges against Wilson.

On Aug. 15, Ferguson Police Department identified Wilson as the officer involved in the shooting of the 18-year-old. Since Brown was unarmed at the time of the shooting, many critics say the use of force was unwarranted.

In addition to naming Wilson, Ferguson police released a full incident report along with video and pictures of Brown committing a strong-armed robbery at a cigar shop. Although family members confirmed that it is Brown in the video, critics contend that one has nothing to do with the other.

Since Aug. 9, protests have been consistent, some resulting in vandalism and looting as well as aggressive police responses.