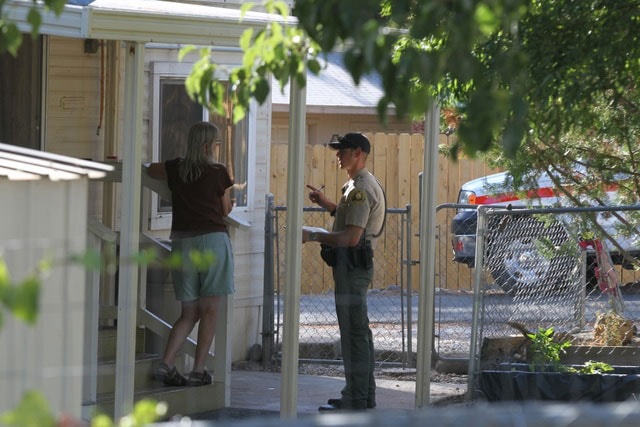 The child’s mother told authorities that her ex-boyfriend had been violent in the past and was usually armed. (Photo: Record Searchlight)

A 1-year-old child’s birthday party in the Mountain Gate area of Northern California on Saturday afternoon turned deadly when the child’s father arrived and became enraged that the mother’s new boyfriend was present.

According to the Record Searchlight, it was about 4:30 p.m. when the child’s father, Marshall Quinn Bernatt, showed up at the home of his ex-girlfriend and the mother of his child, Amanda Rizer. Guests at the home were celebrating her child’s birthday and it’s unclear whether the child’s father was invited.

But when Bernatt discovered Matthew Robinson, who had recently become involved in a relationship with Rizer, he was enraged. The two men became wrapped up in an argument, but Bernatt eventually just left.

Bernatt returned about 20 minutes later, declaring he was going to take the child. The two men became engaged in another argument before Robinson displayed a .38-caliber handgun. The sight of the gun wasn’t enough to frighten Bernatt, who was becoming increasingly agitated and began to advance towards Robinson, who then fired a warning shot.

At that point, Bernatt went to his car, only to return with what appeared to be a 9 mm handgun. It was then Robinson — fearing for his safety — who fired a single shot at Bernatt, striking him once in the chest.

Bernatt was transported to a local hospital where he succumbed to his injuries.

Deputies later determined the weapon held by Bernatt was actually just a toy replica with the orange tip removed.

Authorities confirmed Bernatt had an extensive criminal history and at the time of the shooting was out on bail while facing charges for being a felon in possession of a firearm, possessing controlled substances for sale and possessing stolen property. It was also discovered that the vehicle driven by Bernatt that day was stolen.

Authorities revealed Robinson also had a lengthy criminal history. However, with no felony convictions he was still legally allowed to possess a firearm.

The case will be turned over to the Shasta County District Attorney’s Office for review.