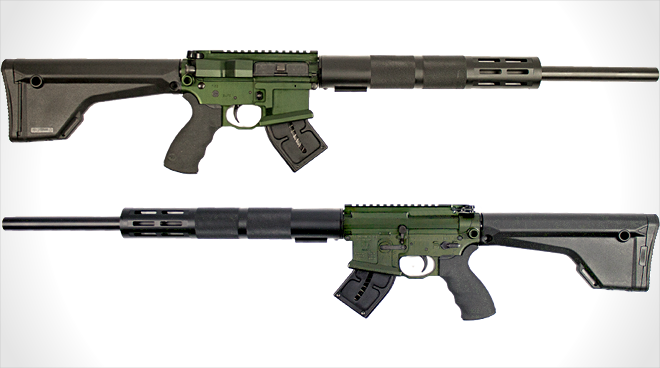 Designed for varminters and micro-scale long-range shooters, Franklin Armory is pleased to announce that their F 17-L AR-pattern rifle chambered for .17 WSM is moving to store shelves now. The F 17-L isn’t quite like any .17 WSM rifle we’ve ever seen, and that’s a good thing.

A relatively new cartridge, .17 WSM was introduced in 2013. This hard-hitting rimfire cartridge uses a .25-caliber fastener blank for a case that’s necked to work with .17-caliber projectiles. Because .17 WSM ammo uses jacketed bullets, it’s a more precise alternative to some other rimfire cartridges that’s capable of generating over 375 foot-pounds at the muzzle, well into centerfire territory.

A huge thing working in .17 WSM’S favor is that rimfire firearms are generally less regulated than centerfire guns. Even AR-15s fly under the radar when they’re rimfire. Putting things into perspective, the F 17-L doesn’t even need a bullet button in California.

It still has some drawbacks as a rimfire round. The F 17-L addresses those with a little help from Osprey Defense.

Rimfire cartridges run on the dirty side. That’s not a big deal with manually-operated guns like bolt-action rifles. The bore may need snaking a little more frequently but that’s nothing serious. With a semi-automatic platform like an AR, it becomes a big deal. This makes the F 17-L appealing in other “ban” states with rimfire exemptions as well.

Whether it’s a blowback design or direct impingement, a semi-auto AR-15 chambered for even the relatively clean .17 WSM will gum up a chamber quickly and suffer from an undesirable number of stoppages, and excess stoppages can ruin any day of shooting.

Franklin Armory tackles that with a custom Osprey piston kit. Running at around 33,000 PSI, .17 WSM is powerful enough to drive a short-stroke piston system. Originally designed to be a drop-in piston system for M4 and AR-15 carbines, the F 17-L uses a modified pistol-length piston kit to ensure the cleanest possible operation.

This means that the F 17-L fires from a locked bolt like a centerfire rifle and doesn’t dump spent gas into the bolt carrier group and chamber. It’s a best of both worlds semi-automatic rimfire rifle.

As far as piston systems go, the Osprey kit is one of the simplest. It uses a custom bolt carrier that is tapered to eliminate oscillation or tilt and a flat piston that can run through just about any conditions. It’s a very simple system that doesn’t even use springs, it resets as the bolt closes.

The rifle itself is a pretty sweet piece of hardware in and of itself, built around a matched set of proprietary matched olive drab green-anodized machined billet 7075-T6 aluminum receivers. The lower utilizes a tensioning screw to eliminate wobble between the receivers and the upper uses a standard ejection port cover and has an integrated shell deflector and working forward assist.

The upper hosts a 20-inch bull barrel with a salt bath nitride finish, one of the hardest and most durable treatments available. The barrel itself is 4140 chromalloy steel finished with an 11-degree target crown and 1-in-9 rifling.

The F 17-L uses an free-fluted handguard with M-Lok-compatible ventilation holes. The handguard is also tapped for bipod or sling swivels and has an integrated bipod mount for shooters who want to take full advantage of this rifle’s accuracy.

A target rifle for sure, the lower receiver is assembled with an in-house tuned custom trigger. The rifle is shipped with a Magpul MOE rifle-length buttstock and Ergo ambidextrous molded pistol grip.

Franklin Armory’s F 17-L is somewhat of a niche product, chambered for .17 WSM and all. It’s greatest appeal is to markets that can’t get an AR-15 that looks like an AR-15 chambered for centerfire cartridges.

These people are willing to drop a little more to get a gun like this — not that the F 17-L is over-priced considering how much precision hardware and how many custom parts it uses — the MSRP is $1,999. Of course that’s the list price and generally real-world prices are lower. The price includes a custom 10-round .17 WSM magazine and rifle case.

You don’t have to live in a state with restrictive gun laws to appreciate the F 17-L for what it is. A powerful, accurate semi-automatic .17 WSM rifle that’s a world of difference from the other options on the market.

If you’re interested in one of these unique rifles head over to the Franklin Armory to find out more.