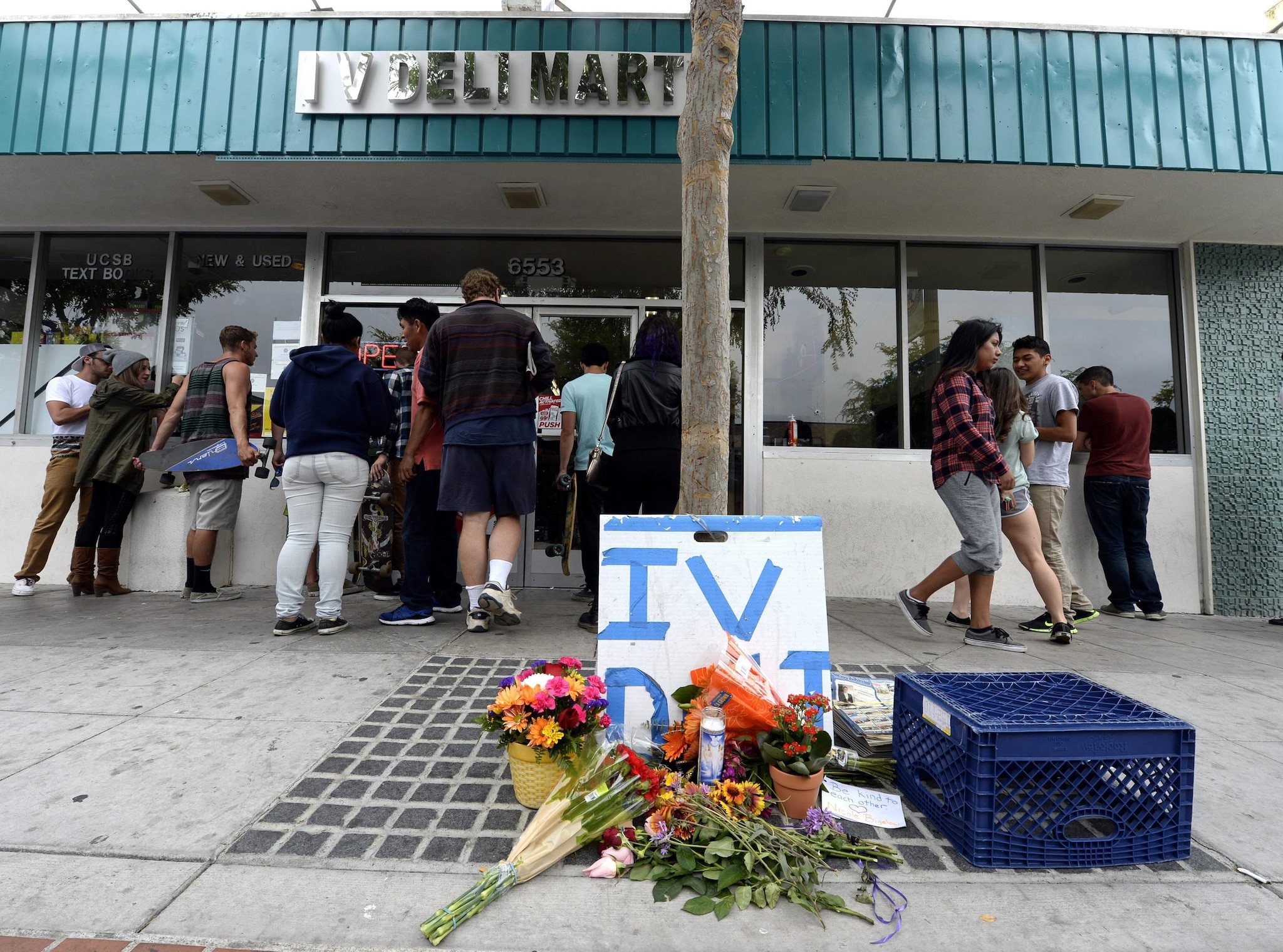 Students gathered near a make-shift memorial at the Isla Vista Deli Mart where one of the victims was gunned down. (Photo: NBC News)

A bill that would provide for “gun violence prevention orders,” introduced just days after the Isla Vista killings,  is coming to a final vote in the California legislature.

The legislation would provide a framework for the temporary seizure of guns from an individual at the request of their family or friends. With the California state legislature slated to end its regular session this week, gun control advocates and gun rights supporters are taking their respective sides on the issue.

“When the mother of a 22-year old (sic) Elliot Rodger saw signs that her son was dangerous, she could not prevent him, even temporarily, from possessing a gun,” wrote U.S. Sen. Diane Feinstein (D-CA) to state lawmakers Tuesday, urging them to enact the bill into law.

“I strongly believe this bill will help save lives by keeping guns out of the hands of dangerous individuals,” Feinstein wrote.

The bill, AB 1014, would allow a family member or law enforcement to request a court order prohibiting possession of a firearm, for up to 21 days, by an otherwise legal gun owner who is believed to pose a “significant danger.” This initial order could be extended for as long as a year if the situation warrants. If passed and signed into law, California would be the first state to implement this sort of far-reaching measure.

This type of legislation has been proposed by those in the mental health field including Renee Binder, director of psychiatry at the University of California San Francisco, and University of Washington law professor Mary Fan.

Feinstein’s letter came a day after a similar one penned by parents and family members of three University of California-Santa Barbara students killed as a result of Rodger’s actions in May. The letter, co-signed by Mark Kelly, co-founder of the gun control group Americans for Responsible Solutions, argues that had AB 1014 been law that Rodger may have been disarmed prior to his spree.

Current state law allows police intervention only if a subject meets the criteria for an involuntary civil commitment to mental health treatment, popularly known as a “5150” in California. Interviewing officers did not feel that Rodger, the suspect in the Isla Vista killings, qualified for a 5150 when they met with him in April.

Opposing AB 1014 are national gun rights groups and their state affiliates, who contend the framework of the legislation can be easily abused.

“This bill’s low evidentiary standards and lack of a mechanism for individuals to present their own defense before being deprived of their constitutional rights fail to meet American standards for due process of law,” wrote the National Rifle Association’s Institute for Legal Action in a release earlier this month.

Meanwhile, local Second Amendment groups have gone so far as to call the measure “a nightmare gun control bill,” and the “Turn in your neighbor bill,” and said the language of the act would make it possible for virtually anyone to ask for a court order for a firearms seizure warrant against gun owners without warning while at the same time offering no diagnosis, counseling or treatment to those at the center of the order.

Even the Liberal Gun Owners Association has criticized the bill saying it would discourage troubled gun owners from seeking help.

“Good intentions do not make a law constitutional and this bill is plainly unconstitutional,” said Brandon Combs, executive director of the California Association of Federal Firearms Licensees, another state-based gun rights group arrayed against AB 1014. “People cannot be denied their constitutional right to acquire and possess firearms based on secret proceedings.”

Aug. 31 is the last day for the state legislature to pass bills.