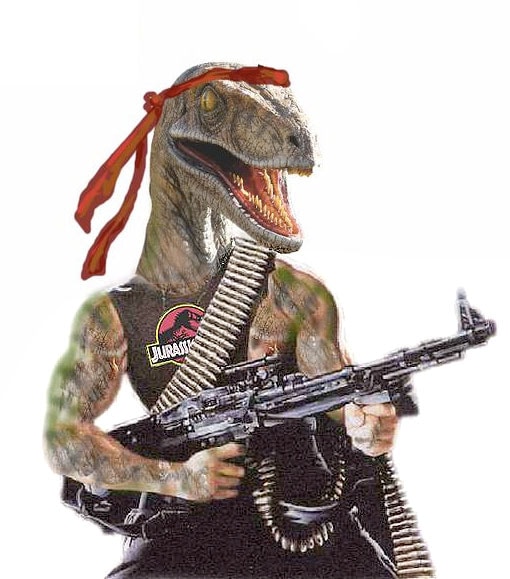 It’s unknown if the dinosaur in the story was also armed, but if so, it’s likely he would have looked similar to this. (Photo: Bizzaro Central)

A 16-year-old boy from Summerville, South Carolina — along with his lawyer — is fighting disciplinary actions taken by the school and local authorities last week over a creative writing assignment.

It was the second day of school when Alex Stone’s teacher asked the students to write a few sentences about themselves, along with a status update for a pretend Facebook page.

According to a report by local media, the fictional piece written by Alex involved him killing his neighbor’s pet dinosaur, as well as him buying a gun in order to “take care of business,” presumably referring to the slaying of the creature.

Alex admitted that the content contained in the writing assignment was only meant to be a joke, but neither the teacher, school staff nor the police department found it very amusing.

Authorities searched Alex’s book bag and locker, but found no evidence that he had at any time possessed a firearm.

Alex’s mother, Karen Gray, was shocked at their reaction.

“I could understand if they made him re-write it because he did have ‘gun’ in it. But a pet dinosaur?” she said. “I mean first of all, we don’t have dinosaurs anymore. Second of all, he’s not even old enough to buy a gun.”

Nonetheless, Alex was arrested for disturbing schools, as well as suspended for the remainder of the week.

The teen and his mother have since hired an attorney.

“This is a perfect example of ‘political correctness’ that has exceeded the boundaries of common sense,” said David Aylor, who is representinng Alex. “Students were asked to write about themselves and a creative Facebook status update – just days into the new school year – and my client was arrested and suspended after a school assignment.”

However, the Summerville Police Department claims the arrest had nothing to do with the writing assignment and that the teen became very “irate” when asked about the details it contained.

“The charges do not stem from anything involving a dinosaur or writing assignment, but the student’s conduct,” said Summerville Police Department Capt. Jon Rogers, who also called the media’s report “grossly incorrect.”

Alex now wants to either transfer out of the school or be homeschooled.

“I regret it because they put it on my record, but I don’t see the harm in it,” Alex said. “I think there might have been a better way of putting it, but I think me writing like that, it shouldn’t matter unless I put it out towards a person.”