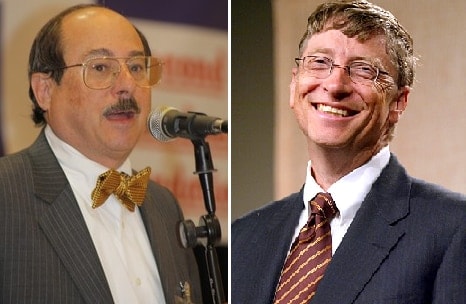 On the heels of wealthy philanthropists Bill and Melinda Gates donating $1 million to fund a universal background check initiative in Washington, gun rights advocate Alan Gottlieb is challenging the billionaire to a debate on the issue.

In a statement released Wednesday, Gottlieb, in his capacity as chairman of the Citizens Committee for the Right to Keep and Bear Arms, publicly asked the tech guru to join him in a meaningful discussion of ballot Initiative 594, an 18-page amendment to state law that would require virtually all gun transfers to go through a background check.

Gottlieb and his group were key in the drive earlier this year to get a counter initiative, I-591 — which would largely keep the status quo — added the ballot.

Gates — along with fellow Microsoft luminaries Paul Allen, Steve Balmer and Connie Balmer — joined by venture capitalist Nick Hanauer in dropping no less than $3.4 million into the war chest to support the background check initiative.

This has Gottlieb seeking satisfaction in a battle of dialog.

“Bill Gates and his billionaire friends Paul Allen, Steve Ballmer and Nick Hanauer are using their riches in an effort to buy an election,” Gottlieb said. “They will purchase slick advertising, buy professional spokesmen, and try to steamroll their opponents. But Gates should speak for himself, and be willing to defend his position one-on-one.”

“It’s time for Gates to put his mouth where his money is,” Gottlieb continued. “It’s one thing to be for background checks, but I-594 is poorly written bad law, and all the money in the world won’t make it better.”

In recent months Gottlieb’s group has, on budget of some $1 million, garnered the endorsement of police groups in the state including the Washington Council of Police and Sheriffs, and the Washington State Law Enforcement Firearms Instructors Association. Joining this group is a consortium of gun rights organizations, including the National Rifle Association and Washington Arms Collectors.

“We are pleased to join many others making a donation to the Washington Alliance for Gun Responsibility to support Initiative 594 on the November ballot. We believe it will be an effective and balanced approach to improving gun safety in our state by closing existing loopholes for background checks.”

Gates and like-minded donors on the other hand are supporting the Seattle-based Washington Alliance for Gun Responsibility. WAGR maintains that the current “loophole” of private firearms transfers makes it easier for guns to be used in crime by those prohibited from possessing them. They have been endorsed by several faith-based groups, physicians groups and Michael Bloomberg’s Everytown for Gun Safety organization.

The Gates, through their foundation, are best known for funding a wide variety of less controversial projects ranging from female condoms to cows that smell like humans and touch-screen patient feedback tools.

However, it should be noted that one of the trustees of the Bill and Melinda Gates Foundation is investor Warren Buffet, who is also an inaugural member of the advisory board of Everytown.