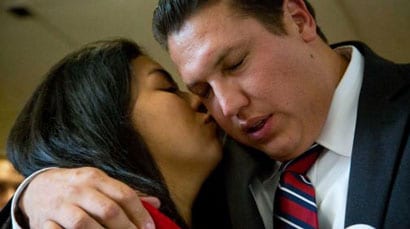 When the verdict was read, families of both the boys who were killed and the drunk driver began sobbing. (Photo: Houston Chronicle)

After just three hours of deliberation on Wednesday, a jury acquitted a Texas father who was accused of fatally shooting a drunk driver responsible for the death of his two sons.

A local ABC affiliate reported David Barajas had been charged for the death of 20-year-old Jose Banda Jr., stemming from an incident which occurred in December 2012 in Alvin, about 30 miles outside of Houston.

Barajas’ two sons — 12-year-old David Jr. and 11-year-old Caleb — were helping to push the family’s Ford F250 after it ran out of gas. The boys were only about 100 yards from their home when Banda, who had a blood alcohol level of more than twice the legal limit, crashed his Chevrolet Malibu into the truck.

The accident claimed the boys’ lives and prosecutors argued that after watching his boys die and in a fit of rage Barajas ran back to his house, grabbed a handgun and returned to the scene of the wreck to shoot Banda in the head.

There were several problems with the prosecution’s case. There were no witnesses to name Barajas as the one who killed Banda. No gun was recovered and gunpowder residue tests on Barajas’ hands came back with negative results.

Defense attorney Sam Cammack claimed that the only thing Barajas was concerned with that night was saving his sons.

Cammack also posed the possibility that Banda may have been shot by his cousin or half-brother, who were initially at the scene but fled following the crash. Both testified and claimed they did not kill Banda.

“What the state’s perspective is and will always be is that if you or I or anyone we know had a horrible collision and killed another human being, that you get the fair review of the criminal justice system, not a roadside execution,” Yenne told reporters.

“We believe that Mr. Barajas committed the crime and we also know the jury did not believe that beyond a reasonable doubt. We respect that,” she said.

Had he been convicted, Barajas could have faced up to life in prison.

Although Barajas still holds onto a great deal of hurt from the ordeal, he can now rest a little easier knowing this part is over.

“A lot of weight’s been lifted off my back,” Barajas said following the verdict. “I’m hurt about it. It hurt me from the beginning, on top of the hurt that I was already feeling because of my sons.”

Barajas also acknowledged that he was not the only one who suffered a loss that day and showed sympathy towards Banda’s family, who also sobbed after the verdict was read.

“They lost a son, too,” Barajas said. “This was a loss for everybody. This wasn’t a winning situation for none of us.”