Texas homeowner shoots intruder while on the phone with 911 (VIDEO) 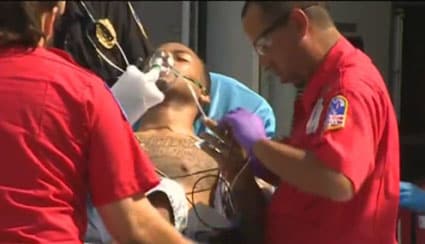 It was a close call, but the homeowner said he’s thankful he didn’t have to take a life. (Photo: Click 2 Houston)

A man is recovering from a gunshot wound after a Harris County, Texas, homeowner shot him during an attempted home invasion Tuesday morning, according to media reports.

Quinton Wood, a postal worker currently on medical leave, was awakened by the repeated ringing of his doorbell and loud knocking at his door just before 10 a.m.

Avery Powell, 25, made his way into Wood’s home by kicking in the front door, breaking the hinges off and busting the door frame in the process.

With the 911 operator on the other end of the phone he held in one hand and gun in his other hand, Wood came face to face with Powell, local media reported.

Wood warned Powell to stop, but his warning was ignored. Powell continued to make his way toward Wood, who at that point felt he had limited options.

“Then everything went bad,” said Wood, still visibly upset over the entire incident.

While still on the phone with 911, Wood pulled the trigger, striking Powell a single time in the torso. And that point, Powell stopped, dropped to the ground and began begging.

Powell’s black Ford Mustang remained parked outside of the residence as he was airlifted to the hospital where he underwent surgery and is expected to survive.

Powell, who is currently on parole, will face charges for burglary of a habitation.

Wood was the victim of another burglary four years ago and he said his peace of mind was just starting to be restored before the most recent break-in.

“I was mad the last time,” said Wood, who at one point had to step away from the media to regain his composure. “I am not even close to being made right now. I’m more or less emotionally … not sure where I am at right now.”