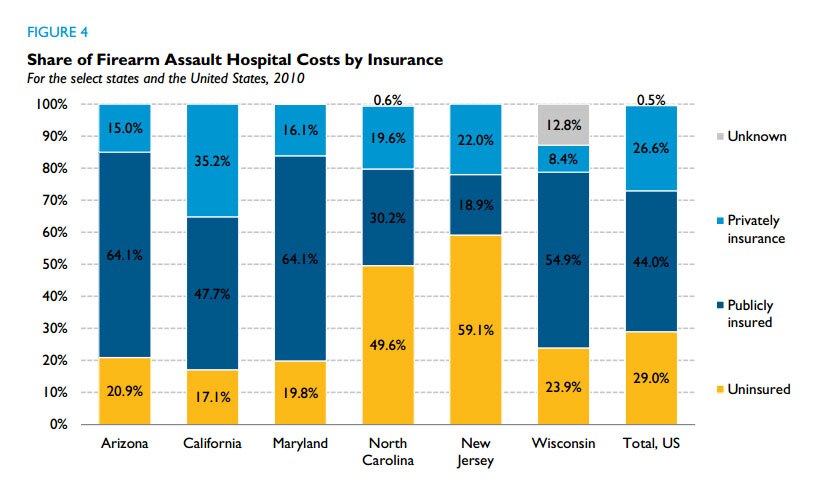 An analysis published by the Urban Institute this week revealed that more than 70 percent of the nearly $700 million which goes toward the treatment of gunshot victims isn’t being paid by either the victims or insurance companies, but rather the American public. In addition, the analysis shows that the overwhelming majority of gunshot victims are a very specific demographic.

In an effort to assess the true cost of gun violence, the institute reviewed statistics from six states with various geographical and societal differences — Arizona, California, Maryland, New Jersey, North Carolina, and Wisconsin. For this analysis, only instances where shots were fired in an intentional manner are considered. Suicides and accidental shootings were not among the studied data for this analysis.

More often than not, gunshot victims in any region of the country seek treatment at the emergency room of the area hospital. In 2010, the total hospital costs for gunshot victims throughout the U.S. totaled $669.2 million and the total amount paid for medical treatment — including care for victims once released from the hospital — topped $174 billion.

But the vast majority of gunshot victims either don’t have insurance or depend on publicly-funded insurance, meaning almost 73 percent of the hospital bills — or nearly $500 million each year — comes from U.S. taxpayer money.

The amount paid — both percentage-wise and monetary value — varied throughout the six states studied. California taxpayers paid the least percentage at just under 65 percent, while Arizona forked over the highest at 85 percent. California topped the charts with monetary value at over $87 million paid by taxpayers for gunshot victims and Wisconsin paid the least at less than $4 million.

The analysis didn’t just focus on funding, it also explored the demographics of gunshot victims, showing a significant difference in both gender and race.

“Among young people ages 15 to 34, black male youth are much more likely to come to the hospital with a firearm assault injury, with a rate 1.7 to 7.2 times higher than the next-highest category, Hispanic males. Black females also have a higher rate than either white or Hispanic females. In every state except Arizona, black females have a higher rate than white males. These findings confirm previous research showing large racial disparities in firearm assault injury hospitalization,” the analysis pointed out. 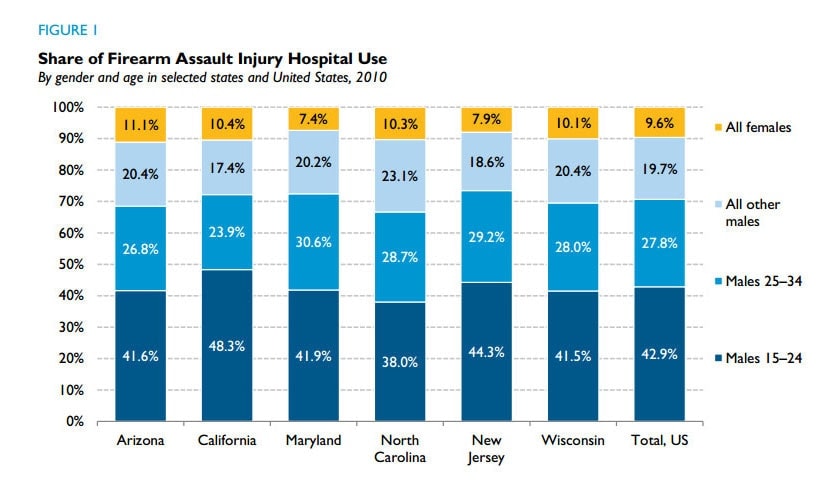 While white males are less likely to be victims of gun violence, only third behind white and Hispanic females, according to a survey published last month, the majority of gun owners are white males.

In addition, the analysis found that each state’s monetary costs for gunshot victims are rarely dispersed evenly throughout the entire state’s population.

“Gun violence is often concentrated in a small number of places and within a small set of communities,” the institute determined. “In Boston, for example, more than half of gun violence is clustered around less than 3 percent of streets and intersections, and in a Chicago community, 41 percent of gun homicides occurred in social networks containing just 4 percent of the population.”