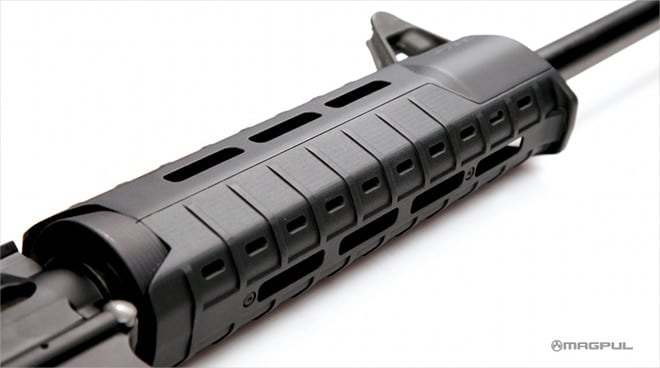 Magpul’s updated MOE SL furniture is now en route to a store near you. The new “Slim Line” series is not only less bulky with a new look it also features Magpul’s new mounting standard, the M-Lok system. This updated line of MOE hardware is designed to be lighter while still living up to the hard-use reputation Magpul has earned over the years.

The existing MOE parts will stick around, at least for now. And thanks to the economies of scale, all of Magpul’s existing telescoping carbine stocks are getting new, lower prices.

With MSRPs as low as $29 Magpul’s stocks are priced in-line with generic A2-style furniture. There’s almost no reason not to go with Magpul when you’re kitting out your next AR carbine if you’re on a budget.

That isn’t to say the new SL series of accessories is expensive. MSRPs for the parts are $59 for the stock, $34 for the carbine-length handguard and $19 for the pistol grip. And as always, we fully expect these to retail for a bit less in the real world.

The SL series takes a minimalist approach to Magpul’s earlier designs. The SL stock is recessed to cut weight and has a rolled toe for shooters who pocket ARs high up on their shoulder. It uses ambidextrous paddles to adjust the length of pull which on a standard carbine stock runs from 11 to 14 inches.

The stock has multiple sling-mounting options including angled and horizontal strap slots and quick-detach swivel stud points on both sides. Gone are the cheek riser slots for use with non-AR firearms, just a sleek comb with a slight extension for a cheek rest. The stock weighs 9.4 ounces. The SL has a texture like the AK grip. (Photo: Magpul)

The MOE SL stock is available in both MIL-SPEC and commercial buffer sizes.

Designed for people who run with short or collapsed stocks, the MOE SL pistol grip is raked with an almost vertical angle, similar to the MOE-K grip. The pistol grip is squared off but still makes room to include a full-length beavertail for a seamless gripping surface and the new grip texture along the front- and backstrap is more aggressive than ever before.

The MOE SL handguard shows the most deviation from existing Magpul products. Currently available in carbine-length only, the new design is smaller in diameter and has a flatter base for shooting off a bag or barricade. The front end of the handguard is extended to wrap around the front sight block right up to the bayonet lug. The front of the hanguard is contoured to act as a hand stop as well. 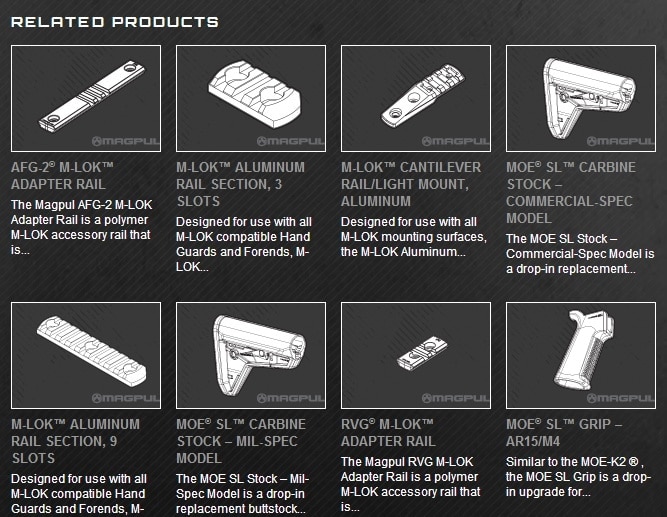 Just a few of the new Magpul accessories. (Photo: Magpul)

Of course the handguard also uses the recently-announced M-Lok mounting system. The forend has three rows of M-Lok slots, at six-o’clock for use with foregrips and other accessories and at the 10 o’clock and two o’clock positions, canted, for use with weapon lights. The grip is heat-shielded and ventilated for the user’s comfort for extended range sessions.

We expect Magpul to announce mid-length and rifle-length MOE SL handguards in the near future.

Time will tell what will happen to the non M-Lok MOE equipment, what will stay and what may be phased out. The good news is that in addition to lower prices on older products, Magpul is supporting their M-Lok products with a solid set of polymer and aluminum accessory adapters, including dedicated AFG and RFG foregrip mounts.

Whether you’re looking to built your next AR or update your current carbine, you may want to give these new Magpul products a once-over. Could be the perfect fit for your rifle.