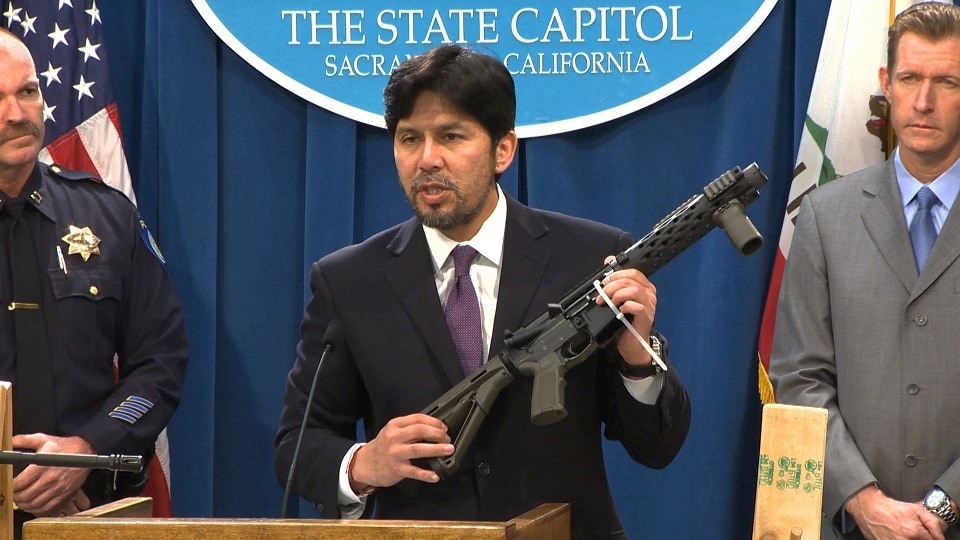 A bill that would require increased regulation on homemade firearms in California has passed the state legislature and now sits on Gov. Jerry Brown’s desk.

The bill, championed famously by state Sen. Kevin de Leon, D-Los Angeles, in a January news conference in which he extolled the characteristics of “30 magazine clips” and “ghost guns,” aims to largely outlaw 3D printed guns and place restrictions on guns made by home based builders. Introduced just eight months ago, the bill passed the state Senate on Aug. 29 by a 21-12 vote and navigated through the State Assembly by a closer 46-30 margin.

“Technological advancements require that we update our laws to meet new and growing public safety concerns to make sure dangerous individuals cannot manipulate technologies at the expense of public safety,” said de Leon in a release last week.

De Leon’s bill, SB808, would require a state Department of Justice Bureau of Firearms background check and authorization before assembling a firearm in the home of a state resident. Additionally, before this could be granted, the candidate would have to show proof that building the gun would not violate local city or county codes.

It would further require those who in the state that have already made their own gun after December of 1968 to obtain and engrave or affix a DOJ-issued serial number and prohibit the sale, transfer or inheritance of these guns.

This pending legislation has Second Amendment advocates rallying to oppose the measure.

Combs contends that the bill is simply too over-broad and far reaching to enforce, let alone survive litigation.

“SB 808 would mean that law-abiding gun owners who follow the law completely would be deprived of their right to sell or transfer serialized, registered home-built firearms,” Combs said. “They couldn’t even pass their legally owned guns on to their children. If that doesn’t show how tyrannical Senator de Leon really is, I don’t know what would.”

Making your own firearm has never been illegal in the United States, providing no law prevent the builder from owning said firearm once it was made. Hunters in search of their own custom bolt-action rifle have long taken old Mauser actions and reworked them into guns that are equal parts art and function. In 2012, a shooting enthusiast made his own legal, semi-auto AK from a shovel.

Homebuilt ARs and AKs and other DIY guns have been the subject of anti-Second Amendment media attention in recent months. In one such article published in Mother Jones, the writer says after attending a build-party in which he legally constructed a semi-auto AK variant, “There are no fussy irritations like, say, passing a background check to buy a kit. And because we’re assembling the guns for our own ‘personal use,’ whatever that may entail, we’re not required to stamp in serial numbers. These rifles are totally untraceable, and even under California’s stringent assault weapons ban, that’s perfectly within the law.”

In recent months, California-based EP Armory and Ares Armor have been embroiled with the ATF over the legality of some of their 80 percent polymer lower AR-15 receivers. On one side the government contends these are unserialized AR-15 lower receivers while the companies hold that they are simply an unfinished piece of plastic that requires extensive machining before becoming a firearm.

The bill’s attack on 3D printed guns has drawn commentary from the 3D printing community as needless regulation on the emerging technology.

“It seems plausible to assume that the only people who would be directly impacted by the law, i.e. those who will contact the DOJ for approval and engrave a serial number onto their homemade gun, are those who have no intent to use it for criminal purposes,” wrote Shanie Phillips in the industry blog Inside 3DP. “Asking a criminal who wants to 3D print his own gun to submit an official request to the DOJ is like asking him to willingly undergo a background check before obtaining a regular gun. You can ask all you want.. but its (sic) not going to happen.”

Senate Bill 808 is currently waiting for review by Gov. Jerry Brown’s office. Brown has in recent months signed bills into law to improve gun tracking and to largely end the practice of Single Shot Exemption. While he has a track record of signing gun control legislation placed on his desk, Brown has in the past vetoed a bill that would have expanded the state’s assault weapon ban.

Combs is hoping that with enough public support, CAL-FFL can pull another veto out of Brown.

“Gun owners in California and across the nation can send Governor Jerry Brown emails, faxes, and hard-copy letters opposing SB 808 and three other anti-gun bills by using Firearms Policy Coalition’s free Take Action tools at VetoGunControl.com. We need all the help we can get,” said Combs.

Brown has until Sept. 30 to sign or veto the bill.