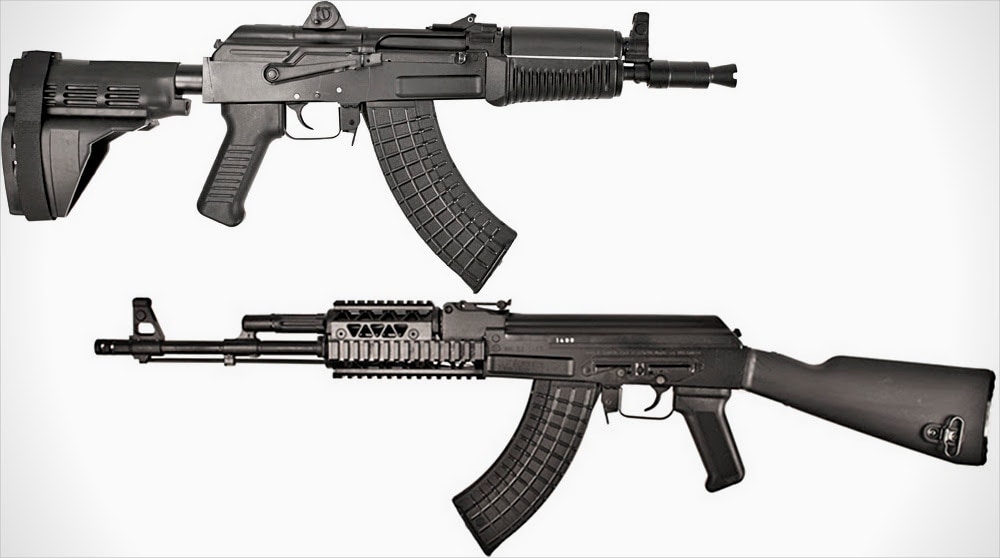 Arsenal is rolling out two new additions to its SAM7 series of AK variants, the SAM7R-66 rifle and the SAM7K-03 pistol. Both are built on new-production mil-spec Bulgarian milled receivers and are chambered for the iconic 7.62x39mm cartridge.

The new SAM7R rifle is equipped with Arsenal’s latest quad-railed handguard designed for use with the Bulgarian military and have only now hit the commercial market after fulfilling Bulgarian contract requirements.

The handguard features four Picatinny rails — one on either side, on top and bottom — for use with any number of accessories from grips to lights and even optics like red dot sights while still accommodating the standard full-length cleaning rod.

The handguard is compatible with both milled and stamped receivers and designed to be strong yet lightweight and is machined from aircraft aluminum. The rear of the rail blocks off the front of the receiver to ensure that debris can’t enter the action. The rails are T-marked for repeatable zeros and smoothed out for a more comfortable gripping surface.

Every SAM7R-66 is built with a military-style pistol grip and fixed Warsaw-length polymer trapdoor buttstock. The stock includes a standard-issue cleaning kit to go along with the cleaning rod. The 16.3-inch barrel has 14x1mm left-hand threading for AK muzzle devices and comes with a detachable four-port muzzle brake.

It uses standard AK sights that are adjustable out to 800 meters.

Note the thumb safety on the pistol grip on the SAM7K-03. (Photo: Arsenal)

Arsenal’s SAM7K-03 pistol comes equipped with an increasingly-popular accessory, the SIG SB15 arm brace. Every firearm equipped with the stabilizing brace comes with a letter from the Bureau of Alcohol, Tobacco, Firearms and Explosives certifying that these are pistols and not short-barreled rifles and that the SB15 does not constitute a stock.

The custom pistol extension isn’t your standard AR buffer tube, it doubles as a sealed watertight storage container with a threaded end cap. It is accessible by either removing the brace or sliding the brace fully forward.

Otherwise the SAM7K-03 is fairly familiar. Like other SAM7 firearms it’s built on the same hot die hammer-forged milled receivers and has a cold hammer-forged barrel built on Steyr equipment using the Steyr method. Arsenal’s barrels are renown for being some of the best in the AK world and the SAM7K-03 is no different.

The pistol has a chrome-lined 10.5-inch barrel that’s equipped with a Krinkov-style muzzle booster for enhanced control and lower flash. Because it’s chambered for 7.62x39mm, even with a 10.5-inch barrel the SAM7K-03 will still produce solid ballistics at the muzzle, making it a fun plinker as well as a serious hitter when it comes to self-defense or handgun hunting.

A couple of changes to the design include an ambidextrous safety lever and Krinkov-inspired sight, however, the rear sight uses an aperture or “peep” sight.

If you’re interested in one or both of these fantastic guns you can find out more at the SAM7R-66 rifle and SAM7K-03 pistol product pages. The rifle is priced at $1,349 and the pistol a bit less at $1,199. Real-world prices are normally substantially less than MSRPs although currently the AK market is a bit crazy. Still, with Arsenal, even if you pay full price you’re getting your money’s worth.

For what it’s worth, SIG donates $3 of for SB15 sold to support the Honored American Veterans Afield, a non-profit organization.

All Arsenal firearms are 922(r)-compliant for use with American-made or foreign new-production and surplus magazines.