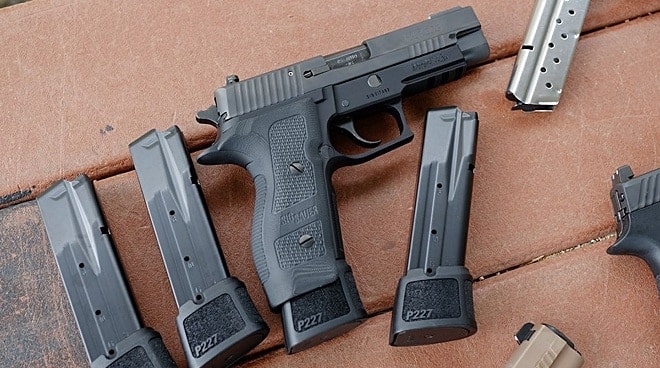 SIG Sauer just shared photos of its newest P227, the Tactical Operations or TACOPS. And at long last, SIG is bringing extended 14-round for their double-stack .45 ACP P227s to the market — and the TACOPS will come with four of them.

Announced late 2012, SIG launched the P227 in 2013 with 10-round magazines, maintaining that 14-rounders would be available down the road. That day is finally on the horizon now that the magazines are in production for the TACOPS and other P227s.

The TACOPS is based on the full-size P227 but features a lot of tweaks and changes that are sure to make this .45 very popular.

The biggest change is the grips. Instead of the newer E2-style single-piece grips, the TACOPS uses more traditional-looking “Classic” grips. They are constructed from G10 composite and form an extended magwell for fast reloads. The frame is also built with an extended beavertail for a high grip.

There are a few tweaks to the slide, including short forward slide serrations for press checks and other tactical maneuvers fitting the TACOPS brand. The slide has standard SIGLite night sights at the rear but with a Truglo TFO tritium fiber-optic hybrid front sight. 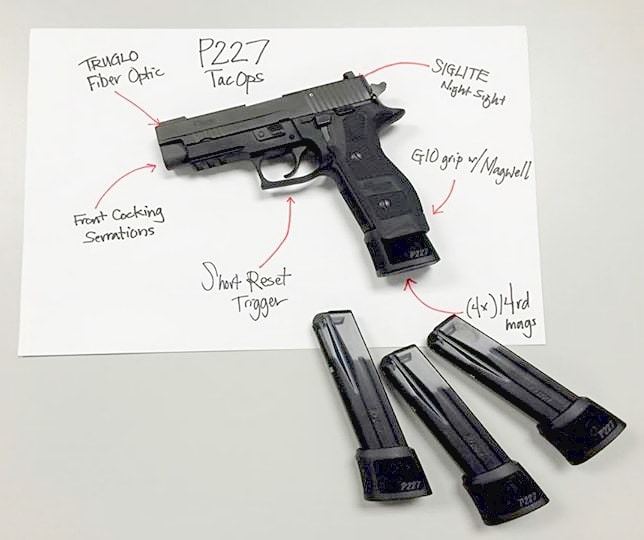 A quick overview of the TACOPS extras. (Photo: SIG/Facebook)

The TACOPS uses SIG’s enduring double-action, single-action operation with a decocker but instead of the regular trigger the P227 TACOPS is upgraded with a Short Reset trigger as well as a slim Short Trigger to offset the larger frame of the handgun.

While SIG does not have a product page listed for the TACOPS we expect it to have specifications similar to the Nitron model, weighing in at around 32 ounces with its alloy frame. Apart from the forward slide serrations it uses the same slide and same 4.4-inch barrel.

This will be the fourth P227 variant following the P227 Nitron, Carry and SAS models. SIG has hinted at other P227 variants including the Tactical, which will come configured with the slim E2 grips, 14-round magazines and an extended, threaded barrel.

Given all the extras including the four magazines we’re sure that plenty of people will find the P227 TACOPS a compelling package. For fans of SIGs and .45 ACP alike, this is going to be at the top of a lot of lists.

And one lucky winner will get a P227 TACOPS for free. SIG is giving away one TACOPS .45 for September’s monthly giveaway. If you’d like to toss your name into the hat head over to the SIG sweepstakes page. For everything else SIG check out their Facebook page.