SilencerCo gets it. It’s about making an impression, and in the world of guns, usually that means being quiet. But sometimes you gotta get loud.

Introducing the MAAD Brake. The Multiple Accessory Attachment Device by SilencerCo is designed to work with existing flash hiders and brakes that incorporate quick-detach suppressor mounting systems while benefiting the user by increasing the level of control they have at the muzzle.

Suppressors are fantastic at controlling muzzle rise and recoil and the MAAD is designed to do the same, just not quietly and thus legal to own and operate in all 50 states. 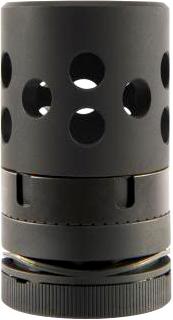 The beautiful blossoms are very pretty side effect. This thing was born to run on short-barreled carbines and pistols.