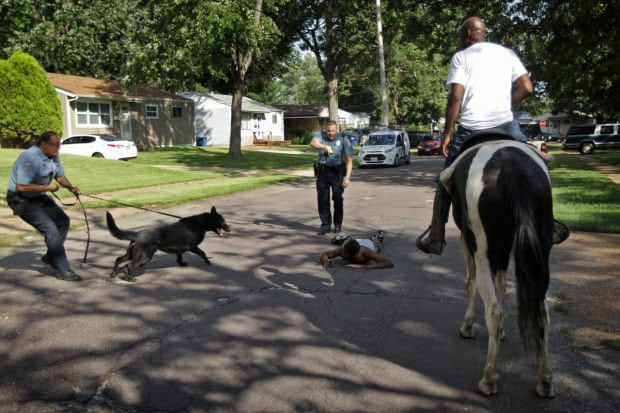 It’s unknown if the suspect was spooked more by the police dog or the men on horseback chasing him. (Photo: St. Louis Post-Dispatch)

A man who became somewhat of a local celebrity when he showed up on horseback during protests following the shooting death of Michael Brown in Ferguson, Missouri, made headlines again when he gave local law enforcement a hand in catching an armed robber Monday.

Keith Butler, who goes by the nickname “Django,” was with his daughter, Jollin Young, riding his horse, Shiloh, with another friend through a Ferguson neighborhood when the trio heard calls for help, the St. Louis Post-Dispatch reported.

A nearby teenager had just been the victim of a robbery – two teens had held him at gunpoint and took his cell phone. And just like straight out of a classic Western, the heroic horsemen came to the victim’s aid.

The two men – while still on horseback – chased down the suspects, helping local law enforcement to apprehend at least one, although it’s unclear if the second suspect was also caught.

Butler first broke headlines when he stood out against the crowd of Ferguson protesters atop his chocolate brown and cream colored steed.

“Whenever teenagers lose their lives, I do a ride,” Butler told Jessica Lussenhop of the Daily Riverfront Times. 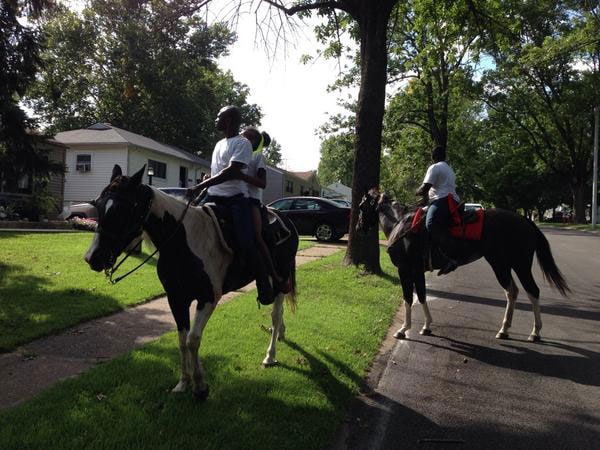 It’s a tradition he started after losing his teen nephew in a tragic car accident.

Butler explained he had to wait several days for tensions to cool a bit before bringing Shiloh out on the streets with other protesters, fearing the loud noise of the flash-bangs and sound cannons might spook the otherwise tame horse.

“All of a sudden, this horse just rode down the middle of the street. The man riding it stopped and got off the horse to spend a moment where Mike was shot and killed,” Lussenhop told NBC News.

“He said he just pays his respects and goes home,” Lussenhop said.