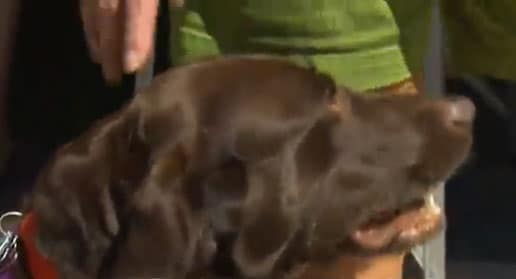 Dinah Burns said her dog, Gracie, did nothing to deter the men from approaching her. (Photo: 10TV)

A woman in Lancaster, Ohio, was able to protect herself Monday when she pulled a gun on two would-be attackers.

Dinah Burns told reporters she had her concealed carry license for some time, but only recently started carrying a gun with her. She was thankful that she had.

Burns was with her dog on a walking path near an elementary school when she was approached by two men, one of who was armed with a baseball bat. One of the men told Burns, “You’re coming with us.”

“I said, ‘Well, what do you want?’ and as I was saying that I reached into my pocket and slipped my gun out, slipped the safety off as I pulled it out,” Burns said. “As I was doing that the other gentleman came toward me and raised the baseball bat. And, I pointed the gun at them and said, ‘I have this and I’m not afraid to use it.’”

Apparently the sight of Burns’ gun was enough to make them change their minds about whatever plans they may have had. After drawing her gun, the two suspects, who Burns was only able to describe as young, white males, ran off.

Afterward, Burns’ took to her Facebook page to warn others of what had happened to her, but not everyone agreed with her actions – or seemingly lack thereof.

“Most of the males’ opinion was, ‘Why didn’t you shoot them?’” Burns said.

Burns was glad she didn’t have to pull the trigger, but had they gotten any closer, she probably would have fired.

“Very thankful that it turned out the way it did, and hope it doesn’t happen again, but I will be prepared,” she said, adding the reason she shared the story was to help others be prepared as well.