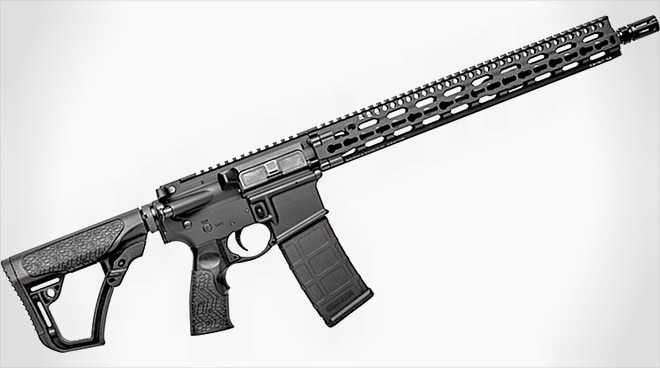 The DDM4v11 weighs just 6.28 pounds thanks to the Slim Rail. (Photo: Daniel Defense)

KeyMod is tearing up the accessory scene with companies rolling out handguards, rail adapters, grips and mounts for the new open-source standard by Vltor. Along with Magpul’s M-Lok, KeyMod is a negative space rail system that is more comfortable and far lighter than Picatinny rails and because of that it’s in high demand.

“Our customers have been hounding us for a KeyMod rail”, said Jordan Hunter, Daniel Defense’s director of marketing in a press release. “Not only were we able to deliver, but we managed to reduce the weight. You’ll be amazed at how light the V11 feels in hand.”

The complete DDM4v11 is equipped with a full-length 15-inch KeyMod handguard that stops right at the flash hider, yet the rifle weighs in at just 6.28 pounds with the standard Government-profile barrel. Daniel Defense will also offer the DDM4v11 with optional 16-inch lightweight or 18-inch Strength-to-Weight barrels as well.

Currently the only way to get a Slim Rail is on a DDM4v11 but Daniel Defense will be selling these featherweight KeyMod rails and others separately in the future.

Daniel Defense has set the suggested retail price of the DDM4v11 at $1,599 which is in line with the company’s other offerings and some sellers have already listed it in the $1,300 to $1,400 range.

The new DDM4 pistols, the DDM4 M18 and 300, don’t have KeyMod rails but that probably won’t set anyone off. Based on the MK18 rifle designed for military and law enforcement, these pistols are fit with full-length Picatinny quad rails that like the carbine stop right at the muzzle device.

They are considerably shorter to match the 10.3-inch barrels both the 5.56 NATO/.223 Remington and 300 BLK pistols have. Both are purpose-built to be close-quarters powerhouses and the only real difference between these pistols an the short-barreled rifles used for social work is that they are built with extended 1.15-inch pistol buffer tubes.

These pistols are begging for a SIG SB15 arm brace or CAA/Thorsden Customs saddle kit or the full SBR treatment if possible.

With an FDE rail and ladders. (Photo: Daniel Defense)

The MSRP on the pistols is $1,699 and like the rifle we expect real-world prices to be a few hundred dollars less than their list prices. As with all Daniel Defense products, you do get the best for your money.

All of these new products are built on MIL-SPEC 7075-T6 forged alloy aluminum receivers with Daniel Defense’s enhanced, flared magwell and integral quick-detach sling mount points as part of the lower. They have a type III hard-anodized finish and are dyed to match perfectly.

Daniel Defense constructs their handguards with lightweight 6061-T6 alloy aluminum and uses their in-house rubber over-molded polymer furniture for the pistol grips and in the case of the carbine, buttstock. All guns have cold hammer-forged chromalloy-vanadium steel barrels and the handguards are free-floating for accuracy.

If you’re looking for the total package with your next AR-15 rifle or pistol you should have Daniel Defense on your radar. For more details and specifications head over to their website.