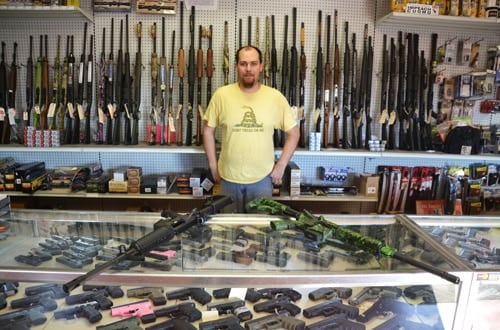 A gun shop owner, threatened with a SWAT team raid, turned over records to the New York State Police of customers who had bought what he believed were SAFE Act-compliant rifles.

The issue is over so-called bullet-button devices installed on AR-15s since January 2013 at the Albion Gun Shop in Orleans County, New York. The bullet button, commonly used in California, which has long had an assault weapon’s ban on rifles with detachable magazines, makes the magazine non-detachable without a special tool.

These rifles had been modified from their original factory configuration to comply, as best as the shop’s owner could tell, with the state’s harsh new gun control legislation, the New York Secure Ammunition and Firearms Enforcement Act. Passed as a reaction to the 2012 Newtown School shooting, the act, among other measures, tightened restrictions on firearms classified as assault weapons by the state.

In an attempt to comply with the new regulations the Albion Gun Shop owner said he reached out to authorities to ensure the modified semi-automatic rifles were correctly altered.

“We were (originally) told that the modifications on our AR-15 were legal and compliant,” the shop owner, Joseph F. Palumbo, 29, told the Buffalo News.

According to Palumbo, he checked with several authorities to ensure he was within the limits of the SAFE Act.

“We had called the New York State gun laws hotline. We had police departments, local, county and state police from two different barracks, sheriffs from Orleans, Niagara, Erie, Genesee, Monroe, ATF, border patrol, assistant district attorneys. Nobody said get them off my shelf,” Palumbo said. “And now they are saying that they are illegal.”

Last week a trooper from the New York State Police narcotics unit came to the shop and advised Palumbo that if he did not turn over his records within 24 hours, that a SWAT team would kick the doors in and take them. After consulting with his attorney, Palumbo handed over the records of 164 customers who purchased an AR-15 modified with a bullet button the next day. The guns were among the most popular item he sold at the shop, in business since July 2012, accounting for some 90 percent of his new gun sales.

Since then rumors have spread through the area of arrests, seized inventory, and the shop being closed down, all of which Palumbo deny. The ordeal has weighed heavily on his nerves, however.

“I’ve had an upset stomach, I’ve had no sleep since Thursday,” Palumbo said to the Daily News. “I’m absolutely terrified, it’s been ridiculous.”

He is currently working both with the customers involved and with state police to further modify the AR-15s in question.

State police released a statement Sept. 3 that confirmed a “gun store owner was selling modified assault weapons he believed to be compliant with the SAFE Act, when in fact they were in violation of the law. The State Police in cooperation with the Orleans County District Attorney’s Office will work with the gun store and its customers (to) come into compliance with the law, as it appears the noncompliance was unintentional.”

A rally is being held to support Palumbo at the Albion Gun Shop Monday Sept. 8.