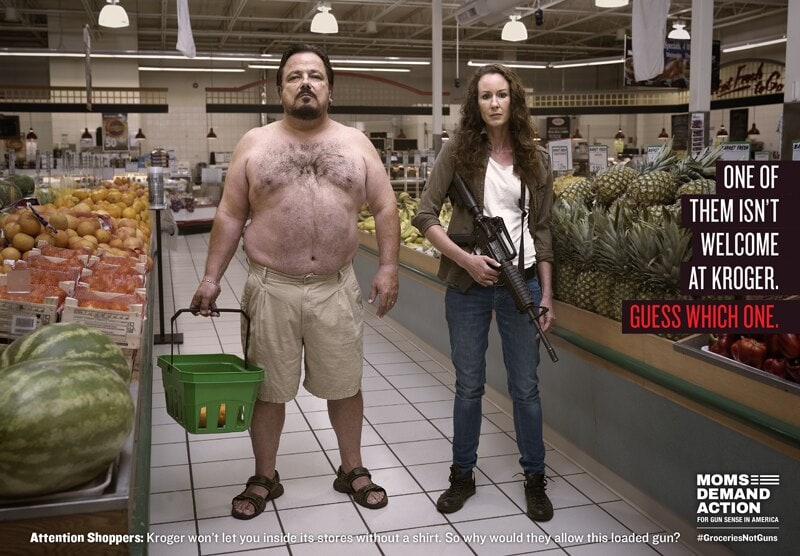 A pro gun control group has launched a series of “corporate-focused” advertisements attacking Kroger in an effort to pressure the national grocery store chain into changing its policy on allowing patrons to openly carry firearms in its aisles.

Moms Demand Action for Gun Sense in America deployed the ads Thursday after launching its initial petition against Kroger several weeks ago. According to the group, the petition has more than 115,000 signatures.

“We’re not anti-gun and we don’t expect Kroger to be either,” Moms spokesperson Amanda Harrington wrote in an email to Guns.com. “In fact, many of our moms are responsible gun owners, and we know that many of Kroger’s customers are, too. But where there are lax gun laws in place that put us all at risk, businesses have an obligation to improve customer safety. Because of this, we’re asking Kroger to prohibit the open carry of firearms in its stores.”

The ads — each showing one person carrying a rifle and another doing something possibly against store policy — ran in the online editions of USA Today, Cincinnati Enquirer, Columbus Dispatch, Houston Chronicle, Detroit News and Detroit Free Press. The imagery takes up a majority of the screen and occurs in several places on some websites.

One of the ads shows a man and a woman standing next to one another in the produce section of a grocery store. The woman has a rifle slung across her chest and the man is shirtless and carrying a shopping basket. The other ads depict a similar situation, but instead pair a teen on a skateboard or a little girl with a person carrying a rifle.

“Attention Shoppers: Kroger won’t let you inside its stores without a shirt. So why would they allow this loaded gun?” one ad reads.

“The images bring into stark contrast Kroger policies that prohibit skateboards, food and a lack of appropriate attire in stores, but allow the open carry of loaded guns. This inconsistency is particularly shocking given that the laws in a majority of states do not require a background check, permitting or even training to open carry a firearm,” said Shannon Watts, founder of Moms Demand Action. “In all states, but especially those where gun laws are lax, businesses have an obligation to protect their employees and patrons.”

Kroger’s released a formal policy statement on the issue, citing customer and employee safety as its chief concern.

“Millions of customers are present in our busy grocery stores every day and we don’t want to put our associates in a position of having to confront a customer who is legally carrying a gun. That is why our long-standing policy on this issue is to follow state and local laws and to ask customers to be respectful of others while shopping. We know that our customers are passionate on both sides of this issue and we trust them to be responsible in our stores.”

“Our policy is in practice identical to most other U.S. retailers,” said spokesman Keith Dailey, who declined further comment, in an email to Guns.com. An ad attacking national grocery store chain Kroger for its pro-gun policy reads, “Attention Shoppers: Kroger prohibits skateboarding inside its stores because it’s unsafe. So why would they allow this loaded gun?” (Photo: Moms Demand Action for Gun Sense in America) 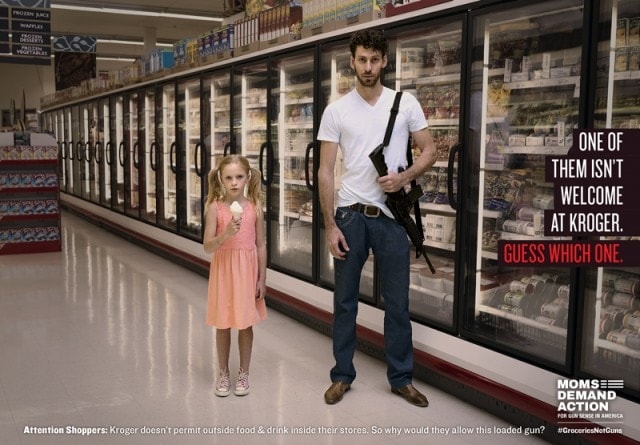 An ad attacking national grocery store chain Kroger for its pro-gun policy reads, “Attention Shoppers: Kroger doesn’t permit outside food & drink inside their stores. So why would they allow this loaded gun?” (Photo: Moms Demand Action for Gun Sense in America)