Woman to intruder in her bedroom: 'I will blow your f-ing head off' (VIDEO) 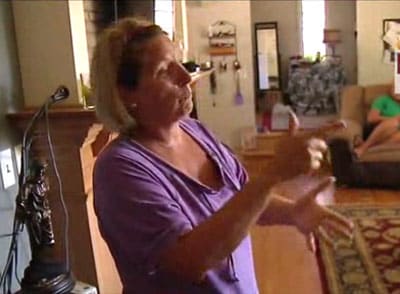 Barbara Haley said she would not have hesitated to pull the trigger had she felt the need to. (Photo: Omaha.com)

A 24-year-old man is behind bars and lucky to be alive after he broke into an Omaha home early Tuesday morning, only to encounter a woman armed with a .45-caliber handgun.

Barbara Haley woke up about 2:40 a.m. Tuesday to her dog barking and sniffing the floor along the hallway. Haley grabbed her handgun and went to see what had the dog spooked.

Although she had what she described as an uneasy feeling, something just not seeming right, she didn’t see anybody, so she just went back to bed. But when Haley heard a loud crash, she knew somebody was in her house. Moments later, she saw two hands coming out of the closet in her bedroom.

And with her .45 in one hand and a phone in the other, she dialed 911 as she held the intruder at gunpoint. As Haley waited for police to arrive, the man, later identified as Jody Kudlacz, suddenly became very apologetic of his actions.

Haley said she thought Kudlacz had been in her house for about half an hour before she found him hiding in the closet. She thinks he came in through the back door, which she usually leaves unlocked because her dog comes in and out so often. However, Haley also added that she will be locking the door from now on.

“I’m glad I had that gun,” Haley said. “And I’m thinking they won’t try this again anytime soon.”

Kudlacz was arrested and booked on suspicion of burglary. He now faces a felony count of burglary and is being held with a $75,000 bond.