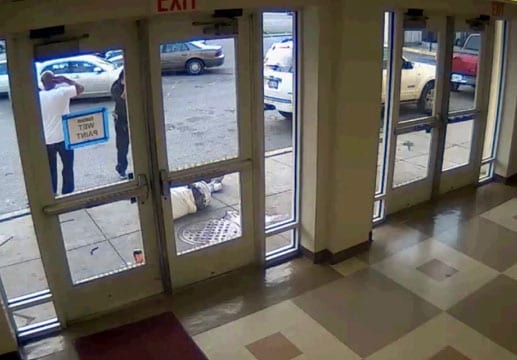 Most of the incident was captured on video surveillance. (Photo: Chicago Tribune)

The family of 28-year-old Marlon Horton, who was fatally shot by an off-duty Chicago police officer following a confrontation last year, has filed a civil lawsuit, claiming deadly force was not necessary and no aid was given to Horton to attempt to save his life after he had been shot.

Horton had fallen asleep on a sofa in the lobby of the Chicago Housing Authority building while going to visit his girlfriend. Apparently his cell phone died and he had no way of calling his girlfriend so she could let him into the building, the Chicago Tribune reported.

Horton made contact with the two security guards in the building, Shaquila Moore and Kenneth Walker, who was also an off-duty Chicago cop, and asked them to call his girlfriend. Both Moore and Walker refused and subsequently asked Horton to leave the building.

Once outside, Horton then began to urinate near Walker’s car. A confrontation ensued, which eventually turned physical, and prompted both Walker and Moore to draw their guns. The three can be seen in video surveillance circling around the parking lot before Horton appeared to lunge toward Walker as Walker fired a shot, striking Horton.

Both Walker and Moore then called 911.

Horton was transported to a local hospital where he was pronounced dead.

An autopsy later revealed that Horton’s blood alcohol level was nearly twice the legal limit and he also had traces of ecstasy in his system.

The lawsuit accuses Walker and Moore of excessive force, failure to intervene, conspiracy, wrongful death and battery. It also names the City of Chicago, the Chicago Police Department, the Chicago Housing Authority, the security company that employed Walker and Moore, as well as the firm which manages the building where the shooting occurred.

“Horton’s family believes that under similar circumstances, if Marlon Horton had been white he would not have been shot and killed,” a local NBC affiliate reported. “Each year Chicago officers arrest hundreds of people for being drunk and disorderly without fatally shooting them,” the lawsuit claims.

“This is not a black and white issue. This is an issue between police and unarmed African American men,” said Jeffrey Granich, the family’s attorney.

The family is also upset that neither Moore nor Walker did anything to help Horton after he was shot.

“At the end of the day the officer called 911 to report what occurred, which is providing medical assistance,” McCarthy said. “The officer was just involved in a life or death situation, sometimes they’re not thinking straight. … Comforting someone who you just had a life or death confrontation with is not an easy thing to do.”