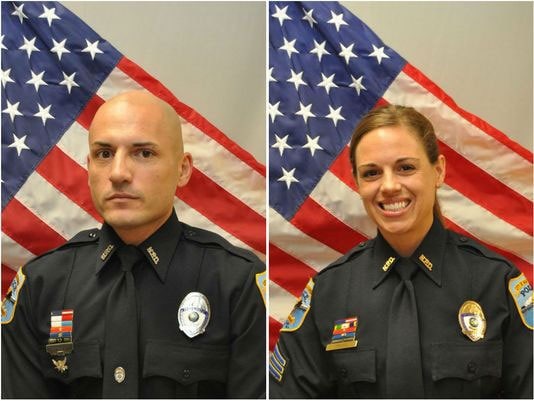 Officer Luis “Dave” Monroig (left) had been a police officer for 10 years and Sgt. Amy Young (right) has been with the force for 14 years. (Photo: Naples Police Department)

A Collier County, Florida, judge granted a request Wednesday for a Naples police officer who was involved in a deadly domestic dispute in July to have her gun returned to her.

Officer Luis “Dave” Monroig suffered a fatal gunshot wound, while his girlfriend and fellow officer, Sgt. Amy Young, suffered a gunshot wound to the face. The incident happened inside the couple’s Estero home on July 9.

Although the investigation has been completed and sent to the State Attorney’s Office for review, according to a report by the Naples Daily News, few details of the incident have been released to the public, including the motive for the shootings and who fired the shots.

However, Young, who was only recently released from the hospital and still on medical leave, was required to surrender her .40-caliber service pistol last month when Monroig’s ex-wife, Nina Diaz-Monroig, filed a restraining order against Young, citing she was in fear for the lives of her children, of whom Monroig was the father. Two of the three children were in the home at the time of the shooting, but were not injured.

According to a local Fox affiliate, Diaz-Monroig claimed Young shot Monroig before turning the gun on herself. However, authorities have yet to confirm this.

Nonetheless, the judge found no sufficient evidence that Young was a danger to the children and refused to grant Diaz-Monroig’s order of protection. Without a protective order, the courts had no legal means to hold onto Young’s firearm.

Young had already put in a request to have her gun returned to her, explaining that the firearm did not, in fact, belong to her, but rather was property of the police department.

Young now has 60 days from the denial of the protective order last month to retrieve her firearm, but neither her attorney, who was present at yesterday’s hearing in her stead, nor the Naples Police Department would confirm if or when Young would be returning to work.