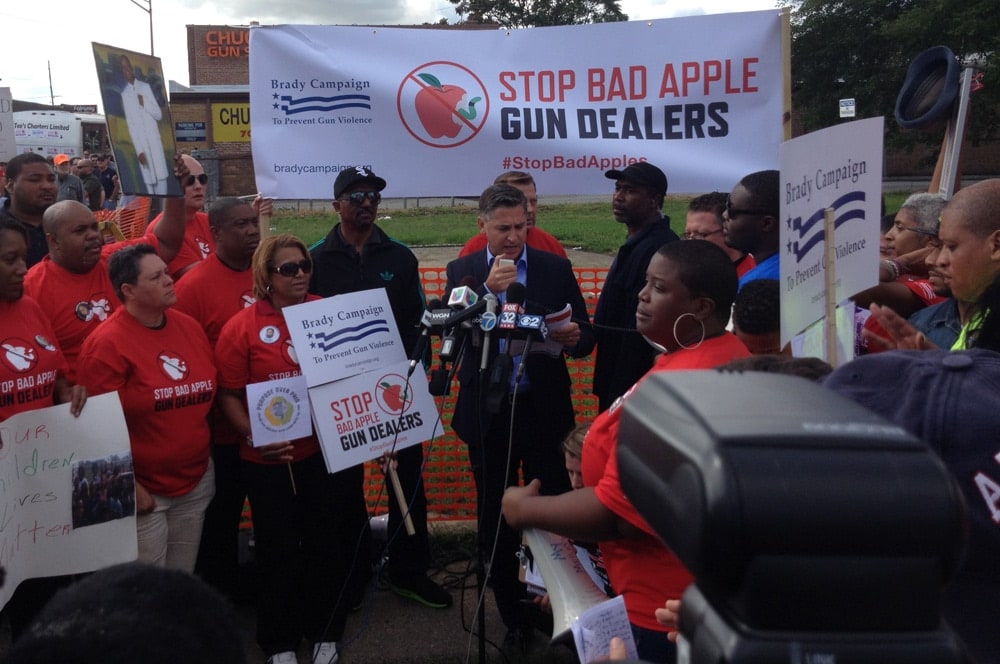 Before dozens of supporters — and protestors to match — at Chuck’s Gun Store in suburban Chicago, the Brady Campaign to Prevent Gun Violence kicked off a national campaign called “Stop Bad Apple Dealers!” to target stores where crime guns are originally sold.

“The vast majority of gun dealers actually do their part and are a strong front line of defense, keeping guns out of criminals’ hands. In fact, more than 80 percent of gun dealers can actually proudly say that they do not report a single crime-gun trace to their shop, but unfortunately that leaves the others,” said Dan Gross, president of the Brady Campaign.

The “bad apples” Brady is referring to are the 1 percent of gun dealers that knowingly sell to straw purchasers — a person who buys a gun for a prohibited individual — or gun traffickers, which amount to 60 percent of all crime guns across the country, according to data collected by the Brady Campaign. Chuck’s Gun Shop in Riverdale, Illinois, has been linked to dozens of crime guns in the past — approximately 268 in Illinois between 2008 to 2012 — and reasoning enough to launch a national campaign at its front door.

The goal is to influence “bad apple” gun dealers to reform through public pressure and litigation, the latter being a major part of the program.

“Without legal accountability these dealers can profit off sales that they know or should know are supplying criminals and leading to murders and other gun crimes,” said Jonathan Lowy, director of legal action for Brady. “But with legal accountability we can take the profits out of supplying the criminal gun market  and we can change the way criminals do business and shutdown those who refuse to change their ways.”

Both Gross and Lowy emphasized that the campaign will target very few gun dealers since the majority of them already meet the ideal standards, iterated in the group’s “Gun Dealer Code of Conduct,” which suggests that retailers selling guns screen buyers and follow proper background check procedures — something the National Shooting Sports Foundation, the gun industry lobby, suggests to retailers as well.

To identify unscrupulous dealers, Lowy said the Brady team will use “all available data,” including trace data from local authorities and the Bureau of Alcohol, Tobacco, Firearms and Explosives.