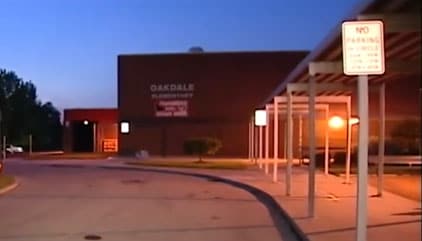 “When you’re talking about a gun, whether it’s a toy gun or it’s a real gun, a cop doesn’t know that,” said one parent. (Photo: WLWT)

A 9-year-old boy was arrested after he brought what turned out to be an airsoft gun near an elementary school last week in Green Township, Ohio, just outside of Akron.

Reports by local media indicated the boy, whose name has not been released due to his age, showed up about 1 p.m. near the playground at Oakdale Elementary School while second-graders were outside at recess.

The boy got the attention of another child and summoned him over to where the boy was hiding, which was technically off of school property, but close to the playground. Once the child drew near, the boy threatened to shoot him. The student went back to be with his classmates and informed a teacher of what had happened, prompting the school to go on lockdown.

Local law enforcement were called and police apprehended the boy at his home a short time later. Authorities confirmed the gun was, in fact, an airsoft rifle, but the boy’s parents were unable to tell authorities where he obtained the gun.

An arrest was made and charges are now pending against the boy, who school officials confirmed that although he was a student at the school, at the time of the incident he was suspended for a reason which they would not reveal.

Immediately following the incident, Principal Geoffrey Harold alerted parents through the school’s Facebook page. Automated phone calls and emails were also sent out, but apparently there was some sort of problem with the phone calls and many parents did not get the notifications.

“It’s kind of weird to see how much social media has grown to know that when your kid’s safety is on the line, that you’re looking on Facebook to see if they’re safe or not,” said Tristan Young, whose 5-year-old child attends the school.

The following day, Harold again took to the school’s Facebook page to announce the child would no longer be attending the school.