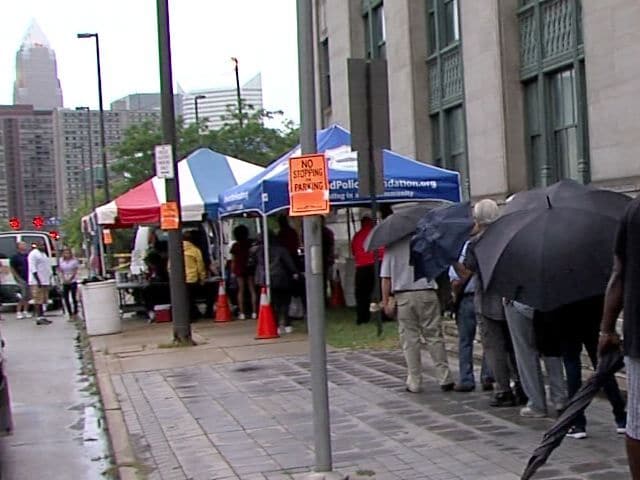 Crowds lined up at the Cleveland Police Department’s annual gun buyback Saturday; however, gun rights groups were also there to pick the cream of the crop. (Photo: News 5 Cleveland)

At a gun buyback held last Saturday in Cleveland where nearly 400 firearms were turned in, a local gun group was able to get to the best hundred first.

The group, Ohio Carry, set up near the buyback organized by the Cleveland Police and offered cash for guns. This was a stark contrast to the gift certificates and tickets to minor league hockey games up for grabs at the police event. The results were that Ohio Carry made off with what it contends was the lion’s share of collectable firearms, while CPD left with 270 mostly low-value ‘junk’ guns.

“The police ran out of gift certificates at about 11:30, so all the people who realized they would be getting nothing came over to a parking lot near us and we bought the guns for cash,” Brett Pucillo, president of Ohio Carry told Guns.com Sunday.

“Overall we saved about 100 guns. Anything worth saving was saved. I would say less than 10 guns of actual value made it through us to get turned in to police. If the guns weren’t worth anything, we directed them over to the police to at least get something for them. And we did encounter a couple with scratched off serial numbers that we immediately directed to the police,” Pucillio said.

The gun rights advocate stressed that all of the guns were bought in individual transactions and included several collectable firearms and antiques. The cache included a Colt 1911 and M1 Garand of World War II vintage, a Ruger Blackhawk and a Dan Wesson .357 Magnum that went into the hands of gun lovers rather than into the furnace door of a smelter.

Ohio Carry is not the only group in the Buckeye State that sets up camp at gun buyback programs. Ohioans For Concealed Carry recently bought an advertising box truck with a large advertisement on the side discussing the ineffectiveness of buybacks in reducing crime and directing people to a phone number they could text to get cash offers on their guns. The truck was on hand for the event this weekend although it is unknown if the group was able to purchase any firearms.

Cleveland Police, who paid for its guns through funds collected by its nonprofit police foundation, did not have a problem with the gun rights group staging their own buy-back to coincide with the one put on by the city.

“It’s OK for them to do that,” Cleveland Police Chief Calvin Williams told Cleveland.com. “But I think people who take the initiative to (bring guns to a buyback) don’t want them back in circulation.”

This is at least the third year that private buyers have attempted to coexist with the city in its annual buyback. In both 2012 and 2013 collectors have been there, giving those with unwanted firearms other alternatives.

As they say about any transaction, “cash is king.”