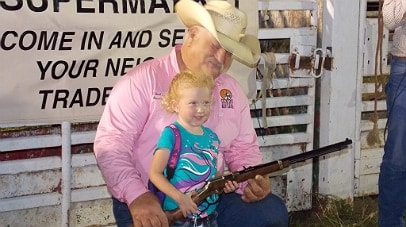 The proceeds of the first rifle to be sold at auction — beginning Sept. 15 on Gun Broker — and the sale of the remaining 99 through authorized dealers are expected to reach an estimated $40,000. The auction will end Nov. 29.

Grayson Sutton spent some 45 days in Denver Children’s Hospital where she underwent several medical procedures, including a heart catheter and two lung biopsies. She may need a lung transplant due to complications from the lung disease.

The rifle, a Henry Frontier .22 lever action, features a hand-painted Kansas state sunflower and the words, “Get Well Grayson” on an American walnut butt stock, according to the gun manufacturer.

The rifle company raised almost $10,000 at auction for the Sutton family in July through the sale of its Golden Boy .22 during the Chautauqua County Fair and Rodeo in their hometown of Sedan, Kansas. The rifle sold for close to $5,000 and the company’s president, Anthony Imerato, donated $5,000.

The donations were part of Henry Guns for Great Causes program,  which gave $100,000 to the Peyton Manning Children’s Hospital and raised $100,000 for the charitable National Rifle Association Foundation in April.