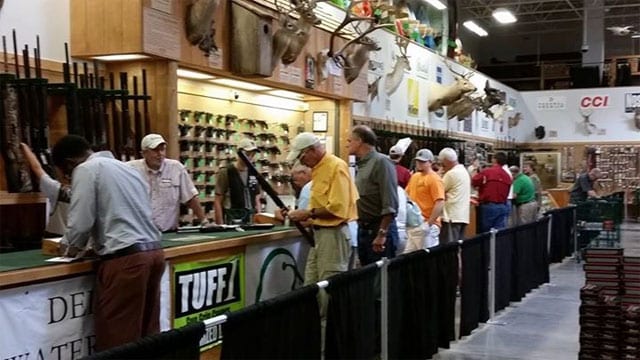 Shooters line the rails of the gun counter of the Sportsman’s Warehouse in Southaven, Mississippi, this weekend for the state’s first Second Amendment sales tax holiday. (Photo: myfoxmemphis.com)

Over the course of Mississippi’s inaugural three-day state mandated tax holiday on guns and ammo, stores across the state saw sales rise by as much as 600 percent.

In March, a bill passed by large margins through the state legislature and signed by Republican Gov. Phil Bryant into law established an annual three day period in which the state’s normally mandatory 7 percent sales tax is not collected on the sale of firearms, ammunition, archery equipment and hunting supplies. Set by law for the first weekend in September, sportsmen across the Magnolia State swarmed into gun shops and sporting outlets this weekend to take advantage of the opportunity.

“When we opened the doors up Friday, it was just a big response,” Freddie Russell, a clerk at Scruggs sporting goods in Tupelo, told WTVA . “It felt like the day after Thanksgiving.”

Russell related that the store had seen a more than 65 percent uptick in gun sales, but one of the hottest items on the shopping lists of area shooters was ammunition.

“Through the months, they’re searching for ammo and everything, and today they can get it tax free,” Russell said.

While items such as firearms, knives and ammunition are clearly covered by the exemption, many other items are also eligible for tax-free sales this weekend. These include shooting bags and pouches, bow fishing accessories, targets and trap throwers. Other items commonly used by sportsmen, however, such as game lures, gun cabinets and binoculars are ineligible.

Scruggs was not alone in the increase. At the Sportsman’s Warehouse in Southaven, managers told local media they sold more some 200 guns on Friday alone and expected that sales for the weekend would be some 600 percent higher. On an average day, the location normally sells just 10-15 guns.

Some in the state felt the tax-free holiday was needless legislation.

“The sales tax break is applied indiscriminately to shotguns, rifles, ammo, Uzis, AK-47s, rocket-propelled grenade launchers, surface-to-air-missiles — anything you might commonly use on your next hunting trip,” said Slim Smith in a Columbus Dispatch editorial. “After all, why simply shoot a squirrel with a shotgun when you can use military-grade weaponry to flat-out disintegrate that sucker? That’s what I’m talkin’ about!”

According to the Congressional Sportsmen’s Foundation, the first state to implement one of these holidays was South Carolina in 2008. That year the Palmetto State saw a 650 percent increase in one-day sales. Since then the legislation has been introduced in Louisiana, Texas, Alabama, Colorado, Missouri and Wyoming.

Mississippi’s next tax free weekend on guns and ammunition is set for Sept. 4-6, 2015.