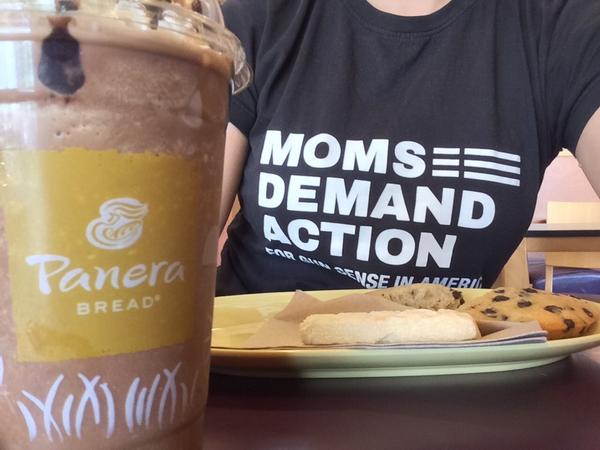 On the heels of an advertising campaign aimed at pressuring Kroger to ban guns in its stores, gun control group Moms Demand Action for Gun Sense in America announced Monday that Panera Bread has joined its growing list of businesses asking customers to “leave their firearms at home.”

“Within our company, we strive to create Panera Warmth,” the company said in a statement. “This warmth means bakery-cafes where customers and associates feel comfortable and welcome. To this end, we ask that guns not be brought into this environment unless carried by an authorized law enforcement officer. Panera respects the rights of gun owners, but asks our customers to help preserve the environment we are working to create for our guests and associates.”

MDA, backed by former New York Mayor Michael Bloomberg, launched a series of ads in several newspapers’ print and digital editions Thursday chiding national grocery store chain Kroger for allowing patrons to carry their guns in its aisles. The ads showed one person carrying a rifle and another doing something possibly against store policy, like shopping shirtless, riding a skateboard or eating ice cream.

“Attention Shoppers: Kroger won’t let you inside its stores without a shirt. So why would they allow this loaded gun?” one ad read.

The gun control group first set its sights on Kroger Aug. 18 with the release of a statement condemning recent gun-related incidences and open carry demonstrations at several of its stores.

“The history of shootings at Kroger stores underscores the risk of allowing open carry demonstrations and rallies to continue,” said Shannon Watts, founder of MDA. “It’s impossible for any employee to ascertain the intentions of an individual carrying an assault rifle — and given the potentially deadly outcome of mistaking a criminal for a protester, or vice versa, it is imperative that the largest supermarket retailer in the nation stands up for public safety.”

Kroger said it is the safety of its employees and customers that motivates the $98-billion-a-year company to allow patrons to legally open carry:

“Millions of customers are present in our busy grocery stores every day and we don’t want to put our associates in a position of having to confront a customer who is legally carrying a gun. That is why our long-standing policy on this issue is to follow state and local laws and to ask customers to be respectful of others while shopping. We know that our customers are passionate on both sides of this issue and we trust them to be responsible in our stores.”

According to MDA, there have been more than a dozen threats at Kroger stores across the country and three of those occurred this year.

In a CNBC online survey of more than 31,000 votes, some 84 percent of participants said Panera’s decision changed their opinion of the restaurant for the worse and 11 percent said it was for the better.

“That tells me something,” Second Amendment Foundation’s Dave Workman told Guns.com. “First it tells me the guns rights guys are really active on this sort of thing. They roll out the votes, but there’s still a very strong majority of people who really dislike this kind of tactic — turning a private business or a chain of stores into a political football field.”