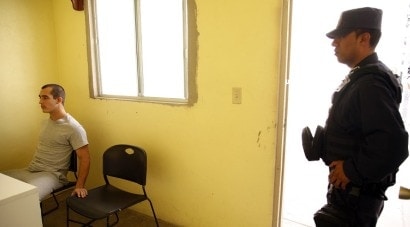 Marine Sgt. Andrew Tahmooressi, seen here in a Tijuana Penitentiary, has been jailed under weapons charges since April after he took a wrong turn and crossed the border into Mexico by accident. (Photo: AP Photo/U-T San Diego, Alejandro Tamayo)

A Mexican court will review video surveillance footage Tuesday of 25-year-old Marine veteran Sgt. Andrew Tahmooressi crossing the border from the U.S. into Mexico with several firearms and more than 400 rounds of ammunition.

The 90 minutes of footage from 18 different cameras will prove the Marine veteran had no violent or criminal intentions the day he mistakenly drove through a Mexican border checkpoint, according to some supporters.

Tahmooressi’s attorney, Fernando Benitez, on the other hand, doesn’t think there will be much evidence on the video, but “We can assume that what’s in the tape will not support their story,” he said.

A psychiatrist will also appear in court to testify on Tahmooressi’s mental condition, which has deteriorated the nearly six months the Marine has been imprisoned, Fox News reported. Tahmooressi suffers from Post-Traumatic Stress Disorder due to injuries sustained while serving two combat tours in Afghanistan and, if sentenced to prison, would not be able to receive proper treatment, Benitez said.

The hearing begins at 11 a.m. and is only for the admission of evidence. No decision will be made.

On March 31, the veteran was driving to meet friends when he took a wrong turn and ended up at a Mexican border checkpoint, he said. The Marine is facing up to 21 years in prison for being in possession of the three legally registered firearms, which should have been declared and approved before being brought across the border, according to Mexican law.

“This was someone who just happened to have them in the car and made a wrong turn when he got to the border,” attorney Phil Dunn of Serving California, a veterans advocacy group, told KUSI News.

In his truck, Tahmooressi carried a 12-guage shotgun he bought for a hunting trip in Alaska when he was 18, an AR rifle purchased about six months after his November 2012 honorable discharge from the Marine Corps and .45-caliber pistol, he told Fox News. The paperwork for all three weapons were in Tahmooressi’s truck at the time of arrest.

“I believe my client’s statement, but not the arresting officers’ version; (Tuesday) we’ll see who’s been truthful and who has not,” said attorney Fernando Benitez on Twitter.

The U.S. State Department said it is watching the case closely.

“As in all cases when a U.S. citizen is arrested overseas, our goal is to see that Mr. Tahmooressi is treated fairly during the judicial process with the hope that he can receive the support, both emotional and medical, that he may require now and at the conclusion of the proceedings. We continue to urge the Mexican authorities to process this case expeditiously,” a U.S. State Department official told Guns.com.