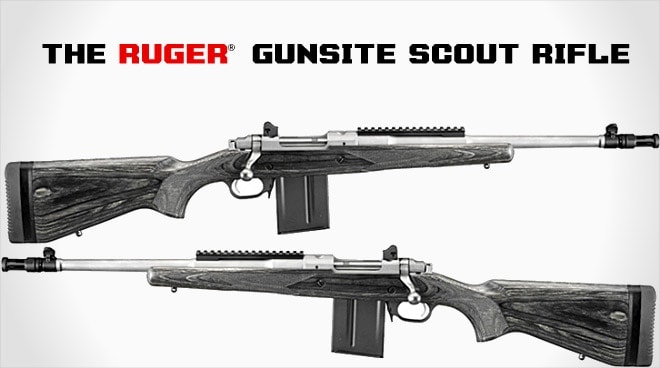 Ruger is expanding on its incredibly popular line of Gunsite Scout bolt-action rifles with several new models chambered for 5.56 NATO/.223 Remington. Originally the scout rifles were only chambered for 7.62 NATO/.308 Winchester.

This is the new product Ruger promoted last week with its unannounced product “Flash Sweepstakes,” a first-of-its-kind giveaway where people signed up for the gun before it was officially launched. The winner was announced on Ruger’s Facebook page.

The smaller-bore rifle will sure to be popular with all types of bolt-action shooters, whether for sport, practice or work around the property. Like the original Gunsite Scout the new 5.56 model is sure to be a workhorse.

Left- and right-handed models will be available in both finishes. (Photo: Ruger)

These will also be popular with people who already own Gunsite Scout rifles and just want something similar but more affordable to feed. The similar flight path of the cartridges is a nice bonus.

Scout rifles are built around a collection of ideals established by noteworthy shooter Jeff Cooper in the ’80s including a lightweight carbine-length package, a forward-set scope mount and fixed iron sights.

Over the years some of the defining aspects of the scout rifle have become quite a bit more flexible as the concept matures including the caliber, and while the Ruger Gunsite may not conform to the original boundaries of the scout rifle, it’s sure to be a marketable success and another feather in Ruger’s cap.

The design has only a couple of tweaks to it for use with 5.56/.223, chiefly the barrel and chamber have been shortened and the magazines modified for the shorter cartridge.

The new Gunsite Scout is otherwise a lot like the old Gunsite Scout, with a grey laminate stock, adjustable length-of-pull inserts, thick rubber buttpad and fixed sling swivels. It has the same fixed front and adjustable rear sights, a birdcage flash hider and of course, rail for use with low power long eye-relief scopes.

The 5.56 scout will be offered in four models, left- and right- handed rifles with a matte black or stainless steel finish.

Ruger has priced these in-line with existing Gunsite Scout rifles at $1,039 for rifles with a matte finish and $1,099 for the stainless, so we expect real-world prices to be around $800 to $850, give or take.

For plinking, patrolling your property and for pest control this might be the right gun for your needs. If you love the concept of the scout rifle in 5.56/.223 and have always wanted a Ruger Gunsite Scout then today’s your day. More information can be found on Ruger’s product page.