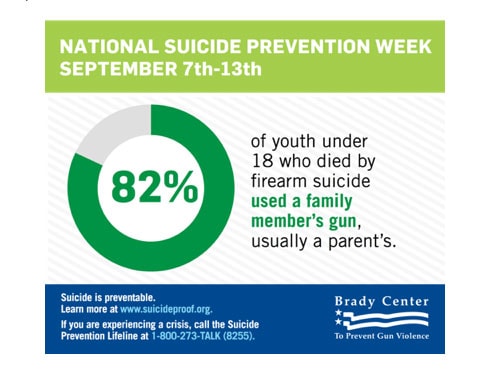 The Brady Campaign, citing data collected by the Centers for Disease Control, says two-thirds, or approximately 20,000, of all annual gun deaths in the U.S. are a result of suicide. Of these, nearly 2,300 of firearm suicides are youth ages 10 to 24. Additionally, 82 percent of youth who commit suicide using a firearm use a family member’s gun, typically a parent’s.

“We can’t always prevent a young person from attempting suicide, but we can reduce the risk of death,” reads the website Suicide Proof, the campaign sponsored by Brady. “In addition to providing love and support and finding help for him or her, we can also take some simple steps that help ensure that a difficult situation doesn’t become a tragedy. 89 to 95 percent of people who survive a suicide attempt do not go on to die by suicide, so removing lethal means from the home can be critical to the outcome.”

The website includes an interactive page with tips for suicide-proofing each room in your home, as well as additional resources.