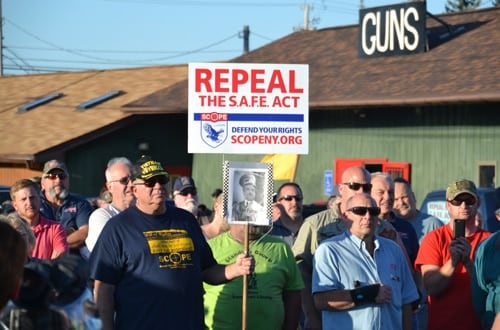 The Albion Gun Shop in upstate New York was the location of an anti-SAFE Act rally this week (Photo: Orleans Hub)

After being forced under threat of SWAT team intervention to turn over 164 customer records to the state police, a gun shop owner in New York is finding support.

Some 250 assembled outside the Albion Gun Shop in upstate Orleans County this week, but they were not mad at the storeowner, Joe Palumbo. Instead, they directed their ire towards state lawmakers who implemented the controversial New York SAFE Act last year. The act, passed in reaction to the 2012 Newtown School shooting, placed additional regulations on what Albany considers to be ‘assault weapons.’ To comply with the new requirements, Palumbo installed bullet button devices to permanently affix the once-detachable magazines to the lower of AR-15 style rifles so that they could not be removed without a tool.

However state police deemed his modification incorrect and two weeks ago threatened the shop owner with a raid if he did not turn over the information of more than a hundred customers that purchased the retrofitted rifles.

“If you think this is the last time something like this happens — you’re sadly mistaken,” said Joe Mesler, president of the 2nd Amendment Coalition of WNY, which led the event along with several other local gun rights groups.

According to local reports, speakers addressed the crowd, pleading with them to head to the polls this November to register their dismay against Gov. Andrew Cuomo, D, and others who are seen as supporting the SAFE Act’s speedy passage. As noted in previous Guns.com articles, the SAFE Act implemented a number of controversial measures that restrict gun owners; among them, it strengthened the state’s ban on ‘assault weapons’ by broadening the definition (changing the criteria from two cosmetic features, e.g. barrel shroud and a pistol grip, down to just one, e.g. a barrel shroud) and required registration of all the newly defined ‘assault weapons.’

An April 15, 2014 deadline to register guns affected by the enhanced ban led some gun owners in the state to protest the requirement by burning their registration forms and suspected non-compliance.

The crowd was addressed by a number of local politicians and political hopefuls including Assemblyman Stephen Hawley. The Batavia area Republican further posted a statement on his social media account expressing his concerns over the SAFE Act, detailing Palumbo’s dangerous Catch-22 situation of first having his bullet button modification approved, then retroactively deemed illegal.

Besides Hawley, several other New York politicians have campaigned on anti-SAFE Act platforms. Last fall, Erie County Sheriff Timothy B. Howard was elected to a third term last week because, in large part, he vowed not to enforce the sweeping gun control statute.  Republican gubernatorial candidate Rob Astorino is currently making very clear to New Yorkers who value their constitutional rights to keep and bear arms, that is if he is elected the next governor of The Empire State he will do away with the SAFE Act altogether.

While Palumbo notes that he is grateful for the support of the crowds, he is also busy filling in the modified bullet buttons with epoxy to comply with the current state police guidelines. Meanwhile, a legal defense fund has been set up to help defray his growing attorney’s fees.