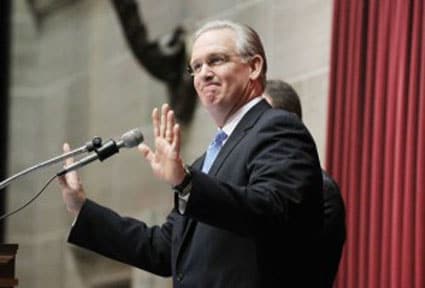 The bill passed earlier this year, but when it came across the desk of Gov. Jay Nixon, he said no way, and vetoed it. (Photo: KMOV)

SB 656 would have lowered the minimum age requirement for concealed carry to 19 and expanded the number of places a person could legally open carry in the state. In addition, the bill would also allow teachers and other staff who have undergone training to carry firearms on school property.

Republican Sen. Will Kraus of Lee’s Summit sponsored the bill and reiterated the choices in training teachers to carry firearms.

“This measure would have left the choice for voluntary training at the local level,” Kraus said in a July statement. “It would have been a decision made between the local school board and individual staff members. Currently, school districts can allow staff with a concealed carry permit to carry a firearm on school property.”

Once the bill had passed, supportive school districts across the state were already sending teachers for firearms training.

But Democratic Sen. Scott Sifton of Affton pointed out that the lower age requirement would likely end in more college students carrying firearms on campus, while Democratic Senate Minority Leader Jolie Justus of Kansas City said he believed the bill would not make the streets any safer and would inadvertently shift the power to decide on open carry away from city officials.

Although the bill had originally passed earlier this year in the Republican-dominated state house by an overwhelming 111-28 vote and the senate a 21-7 vote, Gov. Jay Nixon halted the bill with a veto.

“I cannot condone putting firearms in the hands of educators,” Nixon said. “Arming teachers will not make our schools safer.”

However, the majority of members of the senate apparently still didn’t feel the same way, with a vote of 23-8 in favor of overriding the veto. The bill will now move onto the House, where supporters must obtain a minimum two-thirds vote in order to continue the override.