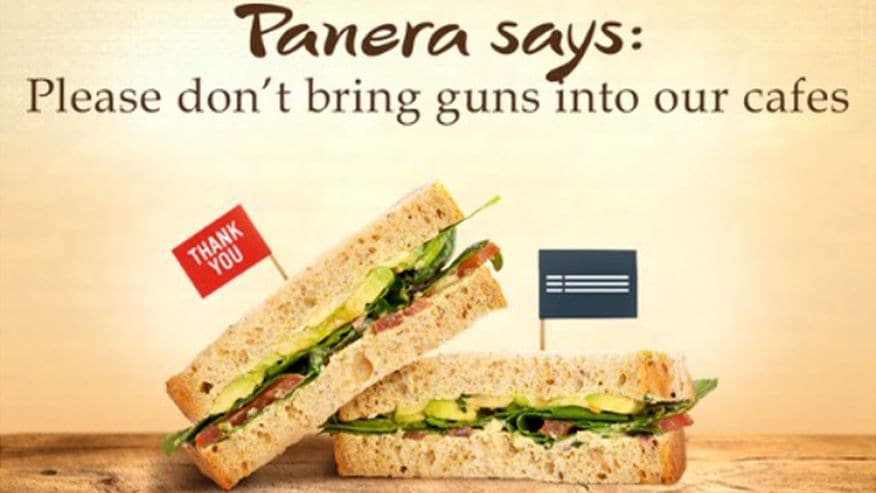 On Sept. 8, Panera started asking customers who are not law enforcement to leave their guns at home. (Photo: Twitter)

Following Monday’s announcement from Panera Bread asking customers to leave their guns at home, many self-professed patrons have taken to the web to voice their opinion.

The company’s Facebook page has been bombarded with comments from gun rights minded social media users since the news of the company’s decision to ask, “that guns not be brought into this environment unless carried by an authorized law enforcement officer,” was announced.

Posts advertising bread were met with comments that read, “You won’t be getting anymore (sic) of my money. I will be going to gun friendly places only,” while one on brownies elicited, “With regard to your ‘no guns’ policy: There will be no business from me and my many friends.”

These comments in turn are drawing return fire from some loyal Panera customers and the inevitable back and forth has produced commentary — not on GMO food products or caloric content of menu items — but of the larger national gun violence debate. In a review by Guns.com of posts made on the company’s Facebook page in the weeks prior to the announced change in Panera’s gun policy, typically 50 or fewer comments were logged, whereas posts made since the change are garnering as many as 600.

This public dialog has spilled over to the twitterverse as well. When Sen. Richard Blumenthal, a Connecticut Democrat known for gun violence legislation, voiced his support for Panera’s move on Sept. 8, a series of over 200 retweets and comments soon followed, most of which chastised both the company and the lawmaker. 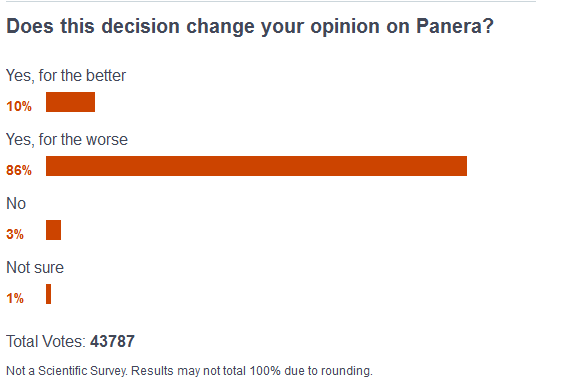 In another gauge of public dissatisfaction, unscientific open-access surveys by MSNBC, The Yellowhammer News, The Times Picayune and CNBC this week all overwhelmingly registered dissatisfaction over Panera’s new policy from those who participated. In the largest sampling, the CNBC survey found that some 86 percent of the 43,787 who opted into the vote believed that the gun policy clarification changed their opinion of Panera for the worse.

One of the few public bastions of support that the company has received is from Moms Demand Action themselves.

“We applaud Panera for working with us to proactively to develop its new policy, and for standing up for the safety of its customers and employees,” reads a statement released by MDA following the company’s announcement. Moms founder Shannon Watts took to CNBC Wednesday in an op-ed to further celebrate Panera’s choice and call for more corporate policy changes.

According to its website, Panera is headquartered in St. Louis, Mo., and has over 2,000 locations nationwide.