Neither the coach or his wife are allowed to have any association with the youth teams, a move which the coach’s family said has left him devastated. (Photo: KAKE)

A youth football coach was kicked to the curb following a physical altercation with a mob of angry parents during a game Monday night in Wichita.

The Wichita Eagle reported the incident occurred around 7:45 p.m. when the mother of a young boy formerly on the coach’s team showed up at the game to confront the coach about her son not being allowed to play in the season’s opening game last weekend.

According to the football team’s director, Jeremy Burris, the boy had been removed from the team last season following what was described as “a character issue” with the child as well as his family. Burris said the family made for a disruptive presence when they would often blare music and curse loudly during games.

The child has played for three separate teams since last year and, because his equipment was never returned to the previous team on which he played, he was not allowed to play during the season opener, which was played between the child’s old and new teams.

“It’s kind of a mutual understanding between teams,” said Jerome Crawford, director of another local youth team. “The only way to maintain our stuff (equipment) is to not allow them to play for another team until we get our stuff back.”

Burris confirmed that, despite what the child’s mother thought, him not being allowed to play had nothing to do with the rival teams or his old coach.

Nonetheless, the mother showed up at the game and began yelling at the coach, prompting a “team mom” to step in and encourage the angry woman to calm down.

The woman eventually left, but police were still called to the park.

About 20 minutes after officers had left, a group of men returned to the park and confronted the coach once again, only this time the confrontation became physical. About half a dozen men started assaulting the coach. One man was striking him with a pair of brass knuckles and another displayed a firearm.

As the mob continued to beat the coach, his wife, fearing for his life, pulled out her handgun and fired a warning shot. There are differing accounts of whether she fired in the air or into the ground, but either way, it was enough to get the attention of the angry mob and stop the attack.

At that point, the coach went to his car and retrieved his own gun, training it on the men who had just brutally attacked him.

Other than the warning shot, no shots were fired and the coach was the only one who was injured.

The mob had already dispersed by the time officers returned to the park.

The coach was treated for a concussion at a local hospital and although released, returned another day for an additional CT scan for injuries sustained during the attack. 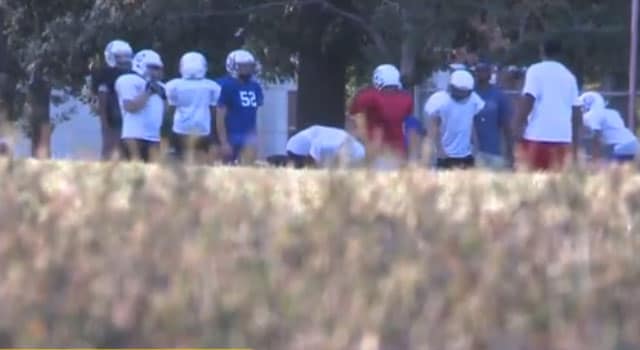 The age of the child whose family caused the disturbance is unknown, but the football league players range from second to eighth grades. (Photo: KAKE)

The coach and his wife, both of who have valid concealed carry permits, were questioned by authorities and their firearms were confiscated as evidence but will likely be returned at a later time.

The incident continues to be under investigation and at this time no arrests have been made.

Although it appears the coach acted in self-defense, he is far from off the hook.

Burris, who readily admitted that the coach has “really helped” and been “a great role model,” confirmed that they have dismissed the coach. The coach’s wife is no longer allowed to have any involvement with the teams as well.

“You can’t take weapons out around children,” Burris said, adding that they have a zero tolerance policy for such situations.

“It’s upsetting to even hear a story like this,” said Wichita police Lt. James Espinoza. “I think as grown-ups we need to act as such. It just sets a terrible example of coaching and parenting.”

But not everyone agrees the coach, or his wife, were in the wrong for pulling out a gun. The day following the incident, a heated argument at the same park took place between a parent and an assistant coach.

The assistant coach believe the actions of the coach and his wife were justified, but the parent disagreed.

“That coach’s wife thought he was going to die. They hit him in the head with brass knuckles,” the assistant coach said. “He has a concussion and they were whooping him. Seven or eight of them. So of course, if you’re in fear of your life, that’s what you’re supposed to do. Protect your family.”

Some parents have now moved their children’s activities to another park, where they feel it is a safer environment.