Ordinarily, the Federal Bureau of Investigation boasts a 99 percent success rate for processing checks, but when NICS was upgraded on Sept. 6, some of the changes misfired and techs have been busy working the bugs out.

“Staff have continuously been on-hand to monitor the situation and to troubleshoot issues as they arise,” said Jill Montgomery, supervisory NICS liaison specialist with the FBI, in an email to Guns.com. 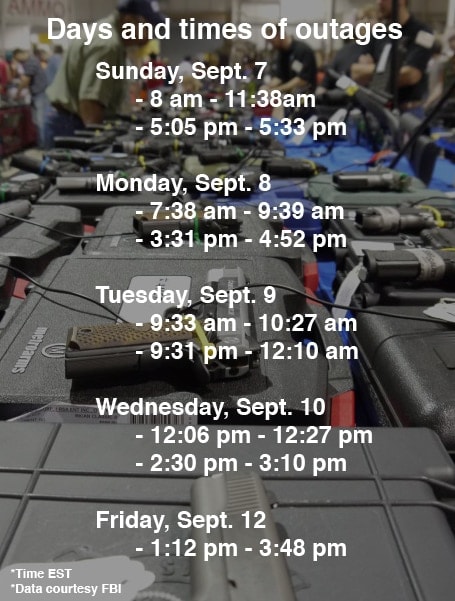 Last weekend, the FBI implemented the Next Generation Identification system — a $1.2 billion biometric system that recognizes facial features, scans irises, and reads palm and fingerprints to identify individuals — to replace the sole fingerprint system. The change has impacted a database within the NGI called the Interstate Identification Index.

The III is one of three databases searched during a NICS transaction, so when it does not respond to a NICS query, a background check cannot be completed. NICS must be shutdown to reconnect the database.

“When the system is taken out of service, it impacts both the telephone call received (NICS Contracted Call Centers) and Internet checks conducted (NICS E-Check),” Montgomery said.

All week the NICS Section has been emailing FFLs about outages and updating them when issues are resolved.

The National Shooting Sports Foundation, a lobbyist group for gun retailers and manufacturers, said it also has been monitoring the outages on behalf of its members.

From its perspective, the outages are not specific to any geographical area or state, said Larry Keane, senior vice president and general counsel for the NSSF.

“We are hopeful that the remaining bugs and glitches will be resolved very quickly so that consumers will not be further inconvenienced and retailers do not lose any more sales,” he said.

However, Keane raised concerns about the timing of the upgrades. “We will be inquiring of the FBI why they chose to do these upgrades now during the  beginning of the hunting season and not over the summer months when sales are slower,” he said.

Montgomery advised FFLs and others concerned parties to sign up on the NICS Section’s FFL email group.